1 Rugged RV Started Life as a Dakar Service Truck, Is Now Offered as a Rental on Camptoo

4 First Look Inside the CyberLandr Overlander: A Kitchen With Invisible Cooktop

5 How Fast Is Your House? Wazimu Overlander Is Hippie Instagram Star
Car video reviews:
Up Next

1958 Buick Roadmaster Looks Stunning in Laurel Mist, It's Ready for the Summer

Michael Ladden describes himself as an explorer, pilot, cyclist, entrepreneur, author, and overland instructor. He is living the dream 24/7, traveling the world, currently in his 1994 Stewart & Stevenson global overland expedition truck.
13 photos

As one of the founders of the Drive The Globe Overland Adventures travel company, Michael Ladden spends most of his time on the road, exploring everything our planet has to offer. Two years ago, he embarked on one epic journey, in fact, the most epic endeavor in the company’s 25-year history, planning to travel 220,000 miles around the world. Up until last year, he’s done it onboard a 41-year-old Mercedes Unimog and custom overland expedition trailer. But in 2021, he switched to a new overland rig, a former military truck that he converted into a gorgeous tiny house on wheels with a full kitchen, bathroom with shower, TV, and a cozy little bedroom.

The 1994 Stewart & Stevenson in the discussion was purchased by our explorer for $18,000 and he converted it himself in approximately four months, with the total cost of the build amounting to around $100,000, which is not exactly budget-friendly. But it was an investment Mike was willing to make, knowing that he has to live in the tiny house full-time so he wanted it to turn out as homey as possible.

One of the most eye-catching areas in the converted military truck is the kitchen, which is bright, airy, and fully equipped. It has plenty of natural light thanks to the large windows and he also installed over-cabinet and under-cabinet ambient lighting. You’ve got all the appliances you can think of in the kitchen, from a propane-fired Dometic combo which includes a three-burner stove and an oven to a large, farmhouse sink, toaster, microwave, dual zone Dometic fridge/freezer, and espresso machine.

The Stewart & Stevenson-based tiny home also comes with air conditioning, Internet, a TV, a full-size iMac, a fully equipped bathroom with a sink, a vanity cabinet, and a Dometic toilet with an electronic flush system. Separate from the bathroom, there’s also a full-size shower with a 32” x 32” (81 cm x 81 cm) base and a glass door. Mike even found enough space in his military truck for a dressing.

You can take a tour of the tiny house in the video below. 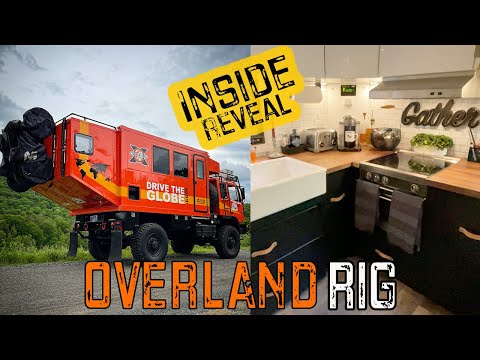