1 Who Needs Tires When There's Plenty of Rubber on the Asphalt? Also, Fire

3 Have You Ever Seen a Police "Chase" in Reverse Gear?

5 Lexus IS Powered by Toyota Supra 2JZ Twin-Turbo Engine Is Addicted to Burnouts
Car video reviews:
Up Next

Guy Does a Burnout on an iPhone 6S

These geeks nowadays, they just won’t stop ruining expensive gadgets for so-called scientific purposes. Defiance does pay off, though, and that seems to be the case with this act, which is rebelling against two things: a $650 smartphone and the concept of doing burnouts.
1 photo
Tech Rex is a guy who spends most of his time destroying new gadgets or at least trying to do so in the most intriguing ways. And he does it while some friend films the moment at the proper resolution. Apparently, he is a Ukrainian YouTuber based in the U.S. who has been around for many years, spending the last four doing similar things.

Why would one ruin expensive gadgets people - often rumored to be underpaid working overtime - strive to build? Because almost three million YouTube subscribers want you to do it. This time around, this geek-heart-crusher has used the newly unveiled iPhone 6S and a Ducati pocket bike for a rather eye-hurting experiment.

He takes the smartphone - which, along with the 6S Plus model, has set a new first-weekend sales record - and puts it in what looks like a metal insert. Next thing you hear is the 50cc engine starting. This other gizmo-killer then puts the rear wheel of the bike on top of the phone. What follows is left for you to discover. Before clicking the play button, you’ll want to know a couple of figures that make this phone special.

As you will observe, the new iPhone 6S features improved hardware specifications, including what Apple calls 3D Touch, a force-sensitive touchscreen; upgraded rear-facing and front-facing cameras; a faster processor; and yes, a new rose gold finish. Is it popular? As of September 28, 2015, 13 million iPhone 6S and 6S Plus models have been sold.

The only question left to ask is whether or not you guys find the experiment normal. 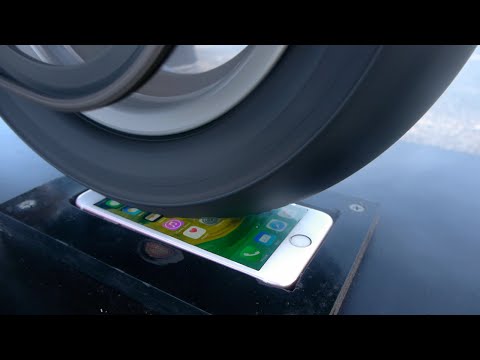