1 Cabin-Style Tiny Home With Dual Lofts Is Both Practical and Cozy, Can Be Yours

3 Ayfraym Plus Is the Modern Adventure Cave: Boasts Two Floors, a Loft, and a Two-Car Garage

5 This $44K Tiny House Combines Modern Luxury With the Rustic Charm of a Log Cabin
Car video reviews:
Up Next

Guy Builds Teeny Tiny Cabin on Wheels for $8K, Turns a Garage Into a Man Cave Too

Those who adopt a minimalist lifestyle say that you don’t need all that much to be happy. That seems to be the case for Keith Herring, who spent four years on the road in his self-built micro cabin on wheels. Additionally, he transformed a garage into a fantastic workshop/man cave so that he could focus more on his carpentry business.
11 photos

Keith wanted to travel and have his own space with a log cabin vibe. Since he’s a carpenter, building a rustic tiny home didn’t seem to be a bad idea. So he designed a small mobile habitat that allowed him to live life on the road. His house measures 8 ft (2.4 meters) in length, and it’s 6-ft-wide (1.8-meter-wide). It’s truly a micro cabin on wheels. But, surprisingly, it offered just enough room for Keith.

More specifically, its interior provides 48 sq ft (4.4 sq meters) of living space. Everything cost him less than $8K because he used recycled materials and gave a new purpose to old stuff that nobody wanted. For example, his back porch is actually an engine grate from heavy machinery, and the outdoor light mounted next to the entryway has an old propane tank that serves as a lamp shade. He even added a mailbox, which turns out to be an old launch box.

On the outside, his tiny cabin features great storage space and a hot water propane shower. The interior is made of vintage stuff. Keith is currently renovating the build, so it doesn’t look its best. He even plans to add a pop-top to extend the overall space.

Since it’s such a small home, you can see everything it includes as soon as you step inside. There’s a small kitchen next to the entryway with a single-burner propane cooktop, some storage areas, and a spice rack. On the opposite side is a large couch that he got from a fifth-wheeler that used to have comfortable cushions on top.

From there, he could use the pull-out desk as his little workspace or watch the TV mounted on the empty wall that faces the couch. Although he lived for four years in this micro cabin, he wanted to focus more on his business and settle down.

So he found a garage that he turned into a workshop/tiny home. Of course, he has significantly more space there. To be precise, the garage offers about 400 sq ft (37 sq meters), which is more than enough for him. Half of it is filled with all the materials and tools that he uses, while the other functions as a man cave that includes everything he needs.

Recently, he offered the folks from Tiny House Giant Journey a full tour of his tiny cabin on wheels and his garage-turned workshop/man cave. Check out the clip down below to find out more about Keith and his creations! 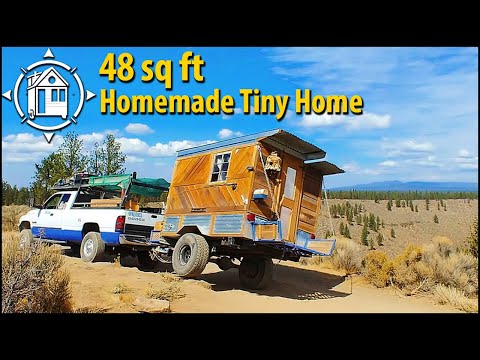