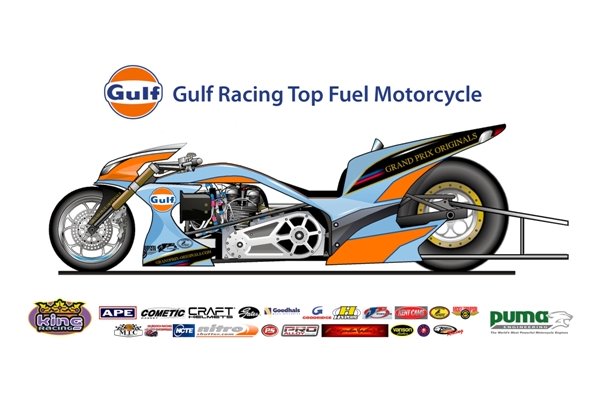 This year, official Gulf distributors from around the world have come together in a cooperative effort, to sponsor UK-based King Racing team, with the Gulf racing livery to adorn a 1500-hp Top Fuel Drag racing bike. The driving force behind this deal is Dakota, Gulf’s Official Clothing licensee, whose branding will also be seen on the bike.

The bike will compete using Gulf’s premium range of lubricants and gear oils as it aims to become the fastest accelerating Top Fuel motorcycle in the world.

“2011 has the potential to be one of the most exciting years ever in Gulf’s motorsport history. The prospect of seeing so many cars with Gulf branding lining up in the world’s top endurance races is truly mouth-watering and should further enhance the profile of the Gulf brand worldwide – as will Gulf’s emergence as a major sponsor in the sensational arena of Top Level Motorbike Drag Racing,” said Gulf Oil International Brand and Marketing Manager, Sam Cork, speaking of the upcoming season.

The Gulf bike is currently in-build and will contest the full 2011 UEM European Drag Racing Championship, starting with the opening round at Kunmadaras in Hungary over the weekend of April 28 to May 1st.

The remainder of the 2011 UEM European Top Fuel Motorbike series runs as follows: