5 Former UFC Boss Takes His Secretive $160M Superyacht Out for a Cruise in Canada
Car video reviews:
Up Next

UH-1N Huey Looks Like It’s Flying Over Hell, It’s Actually a Base in Maryland

You might think that the family behind one of the most valuable luxury brands in the world, the famous Gucci, owns one of the newest superyachts, packed with the latest tech. Instead, the floating luxury toy that’s treasured to this day by one of the Gucci fortune heiresses is a classic sailing yacht that was built in the 1920s, one of the most iconic vessels of all times.

Creole became world-famous after being purchased and brought back to life by Maurizio Gucci, but it already had a long and fascinating story. Maurizio’s tragic death seemed to confirm the sailboat’s unfortunate association with dramatic events.

However, the fashion mogul’s youngest daughter, Allegra, kept it in loving memory of her father and of the happy times they’d spent together onboard in her childhood. To this day, this classic sailboat is part of the family’s heritage, still in excellent condition, continuing to be one of the most impressive wooden yachts still in operation after a century.

Creole was the most beautiful sailing yacht at the time of its launch. Designed by Charles E. Nicholson, it was also the largest yacht ever built at the British shipyard Camper & Nicholsons. Alexander Smith Cochran, an American millionaire known as “the richest bachelor in New York,” became the lucky owner of the grandiose vessel launched as Vira. At 214 feet (65.3 meters), it was truly majestic, and it’s still one of the largest sailing yachts in the world even today.

But Vira was struck by bad luck as soon as it was ready. Cochran asked for several modifications to be made, including shortening the three masts, which resulted in poor performance and excessive rolling. In addition to butchering the original design, Cochran didn’t even get to enjoy his yacht for too long, passing away just two years after the launch.

Ten years later, it seemed that the yacht’s fortune had changed. Restored to its original design and performance, it won several regattas under the ownership of an English baronet. By this time, it was already known as Creole, apparently named after a dessert invented for one of its owners. But soon, World War Two began, and the luxury yacht was drafted into service.

After serving as a mine hunter, all of its former glory seemed to have vanished. It was first saved in 1948 when a Greek tycoon invested a lot of money to get it back into shape. The controversial death of the new owner’s wife onboard Creole was another bad turn that made people believe the yacht was cursed. It was sold to the Danish government in 1977 to be used as a training vessel but was basically abandoned after it became too costly to maintain it.

That’s when it was saved for the second time - Maurizio Gucci purchased it in 1983. He was passionate about restoring classing sailing yachts before it was cool. And, as Allegra Gucci stated in an interview with Boat International, Creole wasn’t “a normal classic yacht, she is an enormous classic yacht.”

Three prestigious shipyards – Beconcini in Italy, Lurssen in Germany, and Astilleros de Mallorca – were in charge of the major refit project. As for the interior, Toto Russo was the one who recreated the glamorous elegance of Creole’s original era, the 1920s. The old boat was once again a luxury pleasure craft. Six fabulous staterooms were ready to accommodate up to 11 guests, filled with the most precious materials and an abundance of artwork. At the same time, twin MTU engines ensured that Creole could sail comfortably at 11 knots (12.6 mph/20 kph).

The Gucci heiress recalls wonderful family vacations in the Mediterranean, which she considers the best location for this massive sailboat. An avid sailor just like her father, she used the family’s other restored classic yacht, the smaller Avel, to compete in regattas. But in 2013, she took Creole out for its first regatta race in 20 years, proving that this venerable beauty was still in amazing shape. Five years later, the iconic yacht, with an estimated worth of $20 million, would also be offered for charter for the first time.

Maintaining this wooden sailboat with a teak superstructure, a steel and teak hull, and 17,000 square feet (1,579 square meters) of the sail isn’t easy- says Allegra. Every year, Creole is taken out of the water, especially for this. But Maurizio’s daughter is determined to keep it going, even maintaining its original black paint. A shiny, new motor superyacht wouldn’t need half the effort. But it would have no history and no family memories. Plus, sailing a classic ship “is pure, it’s like poetry,” Allegra believes.

The murder of Maurizio in 1995 seems to have ended the cycle of tragic twists and turns that brought Creole its bad reputation, leaving only its iconic design and style to shine through. Hopefully, the 95-year-old sailing yacht still has decades of performance ahead. 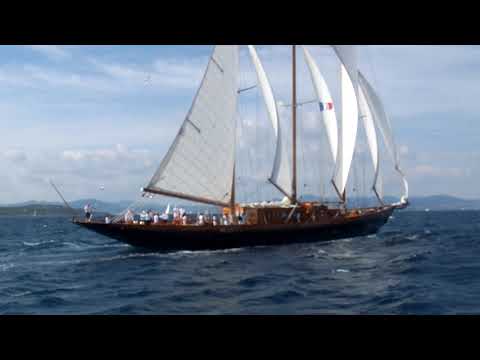