1 Meet the Alpha Neo, a Second Gen Model of the First Hydrogen e-Bike in the World

2 HovBeta 2.0 Aims To Be Your Winter-Ready E-Bike With Power and a Reasonable Price Tag

3 This Futuristic 3D-Printed Thingy Is the nFrontier UILA, a Car and e-Bike Hybrid

Cristian Curmei
Every once in a while, I check back with cycling crews that have been around for ages to see how they keep up with current trends. This time around, GT is that crew, and the machine is their electrified gravel cruncher, the Grade Amp.
10 photos

I know it doesn't look like it, with suck a sleek frame and all, but GT's Grade Amp two-wheeler is an electric beast that has even been granted the "Bike of the Year" for 2020 by none other than Bike Radar. Heck, the only thing Bike Radar had to say about this bike was that it has a "stiff bar," the only downside. So, before you go on judging me for showing you a bike that's gone unchanged in the past two years, let me...wait a minute, that's just it; it hasn't needed any form of upgrading. Time to find out what's so dang special about this one.

Just to kick things off, these hunks of squared-off aluminum are typically selling for around €3,000 (€3,150 at current exchange rates), give or take a hundred or so. Some dealers have even begun dropping prices due to the current state of the cycling industry – the recent boom has led to overstocked shops. Then there's the fact that these buggers come in with a weight of around 14.5 kilograms (32 pounds) for a size L. Ok, I'm starting to understand why GT hasn't tampered with the design in all this time.

Now, this isn't the sort of bicycle equipped with a throttle, no. This one's all about helping you reach those destinations that you typically wouldn't with just your legs. So, to keep that feeling of riding a bike while helping you push your range a bit further than usual, GT has chosen to drop a Mahle ebikemotion X35+ system into the bike's dynamics.

This brings setup brings with it 40 Nm (29.5 lb-ft) of torque to help you get up those hills and even give you a boost while on flat ground, and a 250-watt-hour battery too. I've had the pleasure of testing one of these units once, strapped to an Urwahn bike, and it does not take away from that burn that cyclists want from a bicycle.

The bike I rode, with the same system, was giving me around 80 kilometers (50 miles) of range. Although, with proper management of your battery's juice, you can tack on that range to the distances you'd typically achieve when riding without power. Simply put, use your electric power on hills; the rest is up to your legs.

As for the rest of this bike, GT showcases it as being equipped with a drivetrain from none other than industry giant Shimano. A GRX derailleur moves a KMC X11 chain onto an SLX cassette with 11-42T, all tuned to the sounds and mechanics of just 11 speeds. Throw on a shock-dampening carbon fiber fork, and the Amp is just about ready to be taken out for a spin. I nearly forgot, because GT uses 700x42 tires, more softness is added to your ride.

If we consider that GT has been on the cycling scene since 1972 and is now part of the same manufacturing family that incorporates Schwinn, Cannondale, Mongoose, and a few others, there's no way to doubt that you're buying a bicycle that you'll be riding for a few years or so. Sounds like the Grade Amp is the sort of e-bike you could add to your Christmas list. 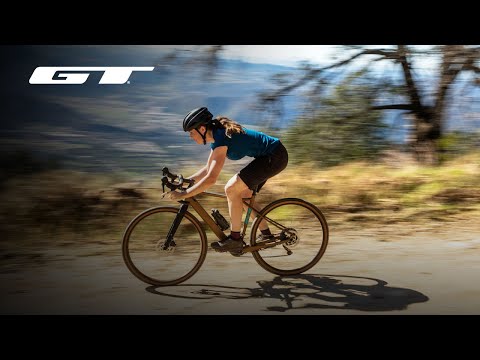 Editor's note: This article was not sponsored or supported by a third-party. Images in the gallery also showcase the Urwhan Platzhirsch.