Home > News > Videogames
22 Jun 2022, 15:15 UTC ·
by Cosmin Vasile
Despite having mixed reviews on Steam, GRID Legends was a step forward for the long-running racing franchise. We’re glad that Codemasters thinks the same and continues to support the latest entry in the series not just with timely updates, but also with new content.
7 photos

Valentin’s Classic Car-Nage is the first premium content pack for GRID Legends and it’s available today on all supported platforms for just $10/€10. However, owners of the Deluxe Edition of GRID Legends will receive the new DLC for free.

Besides more than a dozen bug fixes and general improvements, which are available for all GRID Legends owners, regardless of whether or not they buy the new DLC, Valentin’s Classic Car-Nage brings a new game mode, five new vehicles, four new routes at Yokohama Docks and Havana, as well as eight new story events introduced by Voltz’s Valentin Manzi.

The new mode, named Classic Car-Nage, is a reskinned version of the demolition derby mode that made its debut in GRID Autosport. In Classic Car-Nage, each car vehicle has a life bar that depletes as players get hit; if it reaches zero, you’re out.

The four new routes included in the DLC have been specifically designed for Classic Car-Nage at Yokohama Docks and Havana. Each features multiple crossovers, ramps, and obstacles. Additionally, the new mode is also available in Race Creator, allowing players to take the action online with friends.

As mentioned earlier, the DLC also adds eight new Classic Car-Nage story events, themed around the new mode. Furthermore, three Special Events will be available to unlock in Career mode, which can be played by completing new sponsor objective linked to Classic Car-Nage.

Last but not least, Codemasters added 10 new achievements alongside the new update, as well as additional team icons, banners, and livery patterns. 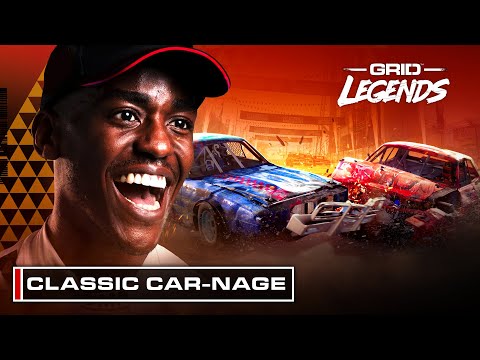