2 Your Guide to AdBlue - What Is It, Who Needs It, and How to Refill It

You may not agree with the methods used by Greenpeace activists - and neither does the law for the most part - but you have to agree that, for the most part, their intentions are honest.
1 photo
As the name suggests, the organization is fighting for environmental protection, a goal that has often put it at odds with powerful companies that wield very large sums of money. Not exactly a small enterprise itself with offices in over 40 countries, Greenpeace is still mostly associated with young men and women on raft boats trying to disrupt large fishing ships or whalers with little else than their bare hands.

Well, the "ecotage" method was in use once more, only this time it was directed at Volkswagen. The Dieselgate scandal sent its ripples over to Europe as well and seems to have accelerated the German carmaker's migration toward EVs, but a large part of its business over on the Old Continent still relies on diesel vehicles.

The activists got word of a ship called Elbe Highway that was about to offload a few thousand Volkswagen cars at Sheerness port in Kent. About 25 of them tried to climb onto the ship after reaching it using boats and kayaks, while almost double that infiltrated the port's import lot and removed thousands of keys.

The goal was to prevent the diesel-powered cars from reaching the UK market, and two of the activists that made it on the ship rolled out a banner calling to "Ditch Diesel." They were arrested shortly after under the UK's Merchant Shipping Act.

Greenpeace says it planned to force Volkswagen to cancel the import, but after retreating to another nearby port, the Elbe Highway returned to continue its business in Sheerness. Needless to say, the organization was not successful.

The funny part is that, according to a Volkswagen statement quoted by the BBC, the majority of the cars weren't even diesel-powered. "The ship contains a variety of Volkswagen Group vehicles, including petrol, diesel, and plug-in hybrid models. The diesel vehicles, which are the subject of the protest, meet strict Euro-6 standards."

In all fairness, Greenpeace could have targeted the transport of any other brand that sells diesels, but it chose Volkswagen precisely because it could link it to the Dieselgate scandal and get more media coverage. While that may seem a bit hypocritical, it does help spread the message more efficiently, which is what this was all about from the start. 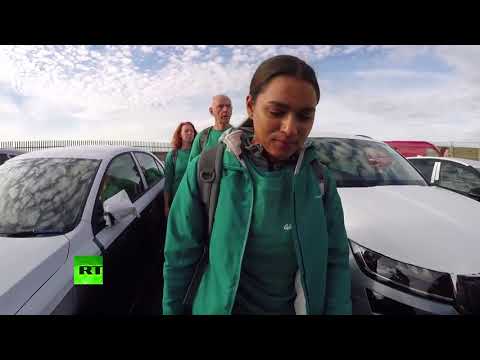