Grayed-Out S 63 AMG is Fit For a Gangsta Rapper

There aren't many adjectives with which you can describe the black/gray uber-luxurious and very powerful sedan in the following video, but “gangsta” is probably the most fitting in just about any context.
1 photo
Starting from a brand new Mercedes-Benz S 63 AMG 4Matic, which is arguably the epitome of a luxury “Q-car” in more ways than one, the peeps from Savini Wheels transformed it into a “look at by dubs” mobile that is all about statement.

The most obvious modifications obviously reside in the forged Savini SV51-C wheels, which look like they could be 24 inches tall, or just small enough not to transform the car into a tacky donk-mobile, also called a hi-riser.

We say “small enough” because Savini offers the same type of wheel up to 32 inches tall, making just about any car fitted with them look like a modern Prairie Schooner while probably offering a similar ride.

Sure the S 63 AMG in the video below is far from being a donk, but we are pretty sure that the above-average S-Class comfort, acceleration and braking figures have been inevitably made quite a bit worse with the addition of those gigantic wheels.

On the other hand, the car certainly looks different and the carbon wheels themselves seem to fit the wheel wells perfectly thanks to the low tire walls, thus creating an almost concept car look when in motion.

In addition, Savini also blacked out all the chrome bits on the car, which creates a rather powerful contrast with what the S-Class represents but without being too tacky. Also, the gray predominant color is pretty good-looking in our view, but we may be the minority. What do you guys think? 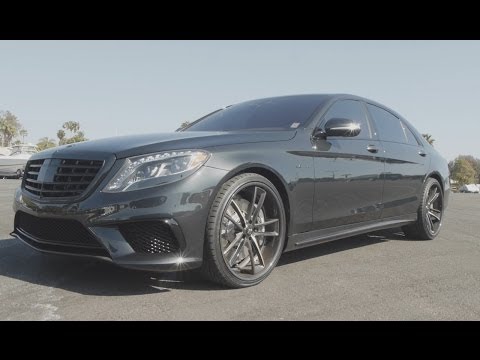