Chevrolet’s Advance-Design truck series existed for a brief moment in the grand pickup scheme of things, entering production in 1947 and completing its new-vehicle stint right before the equally short-lived Task Force appeared in 1955. But that doesn’t mean its representatives aren’t honoring its legacy to this very day.
58 photos

While Advance-Design trucks might never receive the same cult following as other Chevy models from the era (such as the Tri-Fives, for example), that doesn’t mean they aren’t valued as great classic companions for work and fun, or even as benchmarks for impressive custom projects.

This 1952 Chevy 3100 hasn’t gone down the modification route and instead is probably searching for a future owner who values originality above all. We really can’t verify the background of this particular example that’s on sale at the Philadelphia, Pennsylvania, showroom of Gateway Classic Cars simply because the seller doesn’t provide much info about its whereabouts over the past 69 years.

But that doesn’t matter that much since the gallery above speaks a thousand words all by itself. As far as we can tell, this truck with 42,443  undocumented miles (71,500 km) hasn’t spent much of its life running around and doing the daily chores. Or maybe it did all that and was fairly recently treated to a proper restoration that makes it look almost as if we’re back in the 1950s.

No matter the case, the ‘52 impresses with its subtle silver, gray and black looks. As per tradition, there’s lots of chrome to make this workhorse truck feel just a tiny bit more stylish, and the decidedly noire looks aren’t interrupted by anything else than a few splashes of color – noticeably the red Chevrolet lettering up front, the hood ornament, and (above all) the woodgrain inside the bed.

The devil is in the details, as always, so truck aficionados will certainly notice the neat touches brought by the steel wheels with hub caps or the interior treatment that carefully matches the exterior color mix. Under the hood sits a 235ci (3.9-liter) six-cylinder engine that’s paired to a three-speed manual gearbox operated via the column-mounted shifter. We’ll see if all that is enough for someone to shell out $29k, as per the asking price. 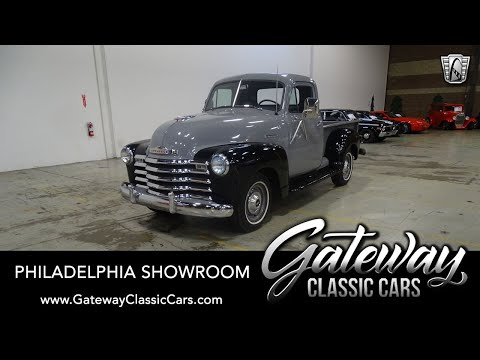