2 Video: Corvette C7 Crashes, Splits in Half in California, Driver Walks Away Uninjured

5 Driving on the Nürburgring? Do Not Behave Like These Drivers
Coverstory

Vlad Mitrache
Things may vary in different parts of the world (they most certainly do, in fact), but where I'm from, once you get your driver's license, the only way you're going to lose it is if you do something really stupid while driving a car. And even then, it's temporary.
7 photos

As far as any medical reasons are concerned, though, you have nothing to worry about. Renewing the piece of plastic is nothing more than a formality as the following true story demonstrates: I was in the doctor's office getting my neurology stamp when this otherwise absolutely adorable old man walks in, also looking to have his license renewed. He's shaking like a piece of jelly during an earthquake. His walking stick moves violently in his hand as if mashing through gears during a technical hill climb. You look at him and you think it's a miracle he can walk, but not for a moment do you imagine he should be allowed to drive.

The doctor, however, seems to be a lot less impressed than I am. He looks at the elderly man and, choosing his words carefully not to offend him, asks: "Please don't take this the wrong way, I don't mean to be rude, but I have to ask this: have you ever fallen off your feet, for no apparent reason?" The old man doesn't appear to be insulted by the question. In fact, he seems proud to give a very determined answer, albeit delivered in a voice that's as shaky as the rest of his body: "Who, me? NEVER!"

The doctor gave him the stamp and off he went, embarking on what must have felt like an endless journey toward the next doctor's office at the end of the hall. I may not have been there, but I'm pretty sure all the other specialists also gave him their blessing, so the likable old man was deemed fit to drive.

It feels cruel to deprive these people of their right to use a car - particularly since mobility can be such an issue for them. But when you think about it, some of them can very easily turn into dangerous liabilities, and that's when you wish these doctors would be a lot stricter in their assessment.

Take the case of this "grandma," as described in the title of the video. After a young man who appears to be her grandson helps her get in the driver's seat, she mistakenly puts her Honda Civic Sedan in reverse despite the fact there was a clear driveway in front of her car and a big Mercedes-Benz SUV behind it.

In fact, the grandson moves out of the way just in time, but then unexplainably places his hand in the car's path, getting it caught between the two vehicles as the grandma fails to realize her mistake in time. Judging by what happens next, it's safe to assume she didn't realize what she had done at all because instead of stopping to see the damage she had caused, she sets off in the direction she should have been headed in the first place.

Don't even think about saying, "this could have happened to anyone." Yes, we can all make mistakes, but we're at least aware of having committed them immediately after. We don't drive away with a plastic bag attached to the back of our car leaving a dented vehicle and a maimed family member behind. Well, not yet, at least, but wait until we're 70. 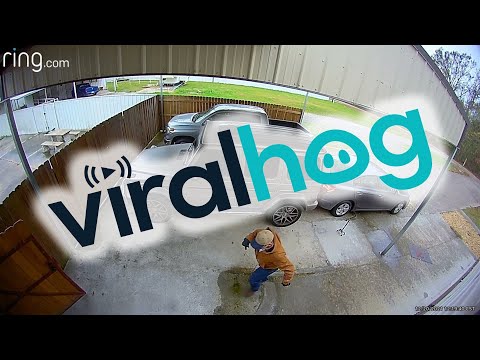