1 World’s Most Advanced Gaming Trailer on Sale, Ford Truck Comes as a Bonus

Mercedes to Launch GLC, GLE, C-Coupe and A-Class Facelift in 2015

Gabriel Brindusescu
Grand Theft Auto was controversial from its very first incarnation and countries like Britain, Germany, France and Brazil banned it for its gratuitous violence. Fast forward to December 2014 and things haven't changed much - we have a new war against the remastered version of GTA V now, this time because a group of feminists got offended by the game’s content and violence.
It all started in Australia, where two retail chains, Kmart and Target, had to pull GTA V from their shelves after a petition launched by three female survivors of violence gained more than 40,000 signatures on change.org against the game, saying that the it's encouraging people to kill women for amusement.

"It's a game that encourages players to murder women for entertainment. The incentive is to commit sexual violence against women, then abuse or kill them to proceed or get 'health' points," reads the petition.

So basically, the petition is all about the video game teaching a new generation of boys to beat up women for fun. For amateurs, this claim might seem legit and could determine them to happily sign anything against the video game, but things are not quite as described, reason why it’s getting on my nerves right now.


Why people should stop bashing GTA

Although I respect those mistreated women for having the strength to fight back after what they went through, I think they clearly have no clue about what Grand Theft Auto is all about. Let me explain a bit.

Grand Theft Auto IS A PARODY to the United States’ culture, including all kind of stereotypes, some funny, others a bit less or even grossing. And NO, the game doesn’t revolve around killing women for fun, that’s not a stereotype.

Yes, the game is violent, especially in it’s first two installments which were lacking a main story and you were basically playing as a criminal needing to ball as much cash and kill as many people for that. However, the latest versions have changed a lot, coming with strong stories to tell, along with the ability to “live” it in different ways.

Let’s take Grand Theft Auto V here for example, which lets you do almost everything while in game, from street racing, robbing banks or killing people for money, to earning the cash in competitions, doing online business or simply helping people around and carrying on with missions.

GTA now gives you almost total freedom, play the story as you want to, be the good or the bad guy. And let me tell you a secret, the story kinda influences you towards playing the good guy.

Heck, one of the characters you play with, Franklin Clinton, is a young black male sickened by all the stealing, killing and other low-minded actions going on in the gang-controlled suburbs, wanting to leave this life and go for a better future.

Actually, there’s only one single woman in the whole game being killed by Trevor Philips, the third playable character, in a cutscene after SHE threats to kill him and another guy with a gun. And no, there is no graphical violence there, as the action happens in an off-screen event. That’s the only time the game’s story throws unavoidable female violence at the player, dear feminists.

Grand Theft Auto isn’t teaching players how to be disrespectful or mistreat women, nor is it encouraging them to grab a shotgun and randomly kill people on the street. A mentally sane person can tell what’s fiction or not and will treat this game as a tool to blow off some steam, have a laugh and do things he/she can’t do in real life for obvious reasons. It can even teach you things about how wrong our society works if you can "read between the lines".

Yeah, the game still allows you to do a drive by shooting, or have “fun” with a prostitute only to kill her after to get back the money. So what? These things were happening in real life long before GTA was invented. You can’t say a satirical game is to blame for all the violence happening in this world.


GTA isn't the only violent piece out there

Why aren’t people signing petitions against Call of Duty? Isn’t that game series instigating war? Oh, wait, “bringing democracy” with a .50 cal machinegun and rockets from a chopper to the Middle East population is something that needs to be encouraged...

Ultimately, as a satirical petition in response to this mess says, why don’t feminists try to stop the Bible itself from selling? You can easily say that’s the first publication ever to tell people women are on a lower social level than men and they should be blindly obedient to them or else they’ll be killed with fire or stones.

The only repetitive thing that might impregnate into someone’s memory from playing GTA is stealing cars, as the game title’s suggest. But as I was saying, sane persons will only do that in a virtual environment and there’s no way a video game could turn a sane person into a maniac.

And regarding the “game turning a new generation of boys into female abusers” statement, you should know Grand Theft Auto is rated M, or 18+, so it’s a game available to buy only by fully grown up persons, who are supposed to know the difference between good or evil already. It might reach into the wrong hands of teenagers or pre teenagers, but bringing this argument is like blaming a kid for shooting up his classmates because you forgot to lock up the gun cabinet.

As a somewhat passionate gamer, I have played all GTA titles so far, along with one of the most graphical, explicit and violent games ever created, yet I’m not in jail, never killed or hurt a person and got a respectable job by writing about cars instead of stealing them.

Guess it’s all about education here, realizing life is not just a very detailed video game where you can do whatever you want and success has to be earned by investing time into one’s knowledge and skill honing, not pulling up a heist.

You don’t want kids growing into violent adults? Better spend time teaching them how life works and stop giving gamers headaches instead. You won’t solve a thing, there may be no games on the shelves for people to buy, but the only thing you’ll manage to do is encourage piracy.

Last but not least, if you think GTA is a bad influence, just wait and see what "Hatred" has to offer gamers next year. Just watch the video bellow. Better prepare a new petition, right? 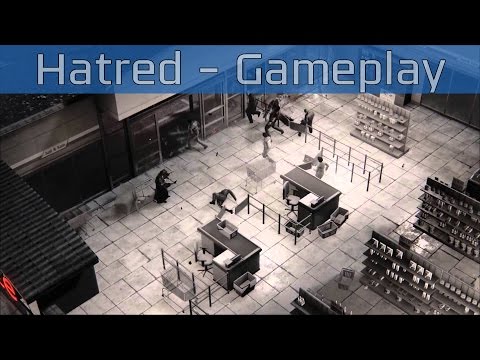