Home > News > Videogames
4 Apr 2022, 20:16 UTC ·
by Cosmin Vasile
GT Bike V is a Grand Theft Auto V mod developed by Nestor Matas and a few other contributors, which has been around for about two years. During this time, the mod got a bucketload of new features and improvements, which turned it into a real treasure for those who love biking.
6 photos

For those who’ve never heard of the mod, GT Bike V lets you connect a smart bike trainer or cycling power meter to Grand Theft Auto V and ride throughout the streets of Los Santos. The mod is capable of turning real-world pedal strokes into virtual rides. It supports stride-based sensors and some smart treadmills (in case you’d rather run instead of biking).

More importantly, the mod record training data in a format that can be uploaded to Strava or other training apps, thus allowing users to track their progress. It also comes with a course reader that auto drives users around Los Santos following different routes of various difficulty levels.

Over the weekend, the mod got even more interesting with the addition of a host of new features. The most important one is multiplayer support. This means that bikers can now share rides and meet each other in GTA V’s Los Santos. Keep in mind, though, that you will still have to run Grand Theft Auto V in story mode, as GT Bike V does not involve the game’s online mode.

Apart from multiplayer support, the new update adds the Cayo Perico DLC, which features a new island positioned a few miles (kilometers) away from the main map. This is now available for riding, assuming you already have the new Cayo Perico course since there’s no road or bridge connecting to the main map.

There’s also a new type of bot included in the update, which should help runners follow courses more easily. The running pacers introduced are, in fact, bike riders that lead the course so the runner can follow it automatically.

Last but not least, the latest GT Bike V update adjusts trainer difficulty by removing slope scaling and adding a trainer difficulty setting similar to the one in Zwift. Basically, the virtual speed will be calculated with the real slope, and the difficulty will only affect the uphill incline value sent to the trainer.

The GT Bike V mod of Grand Theft Auto V is available to download for free, but you’ll need specific hardware to be able to use it. 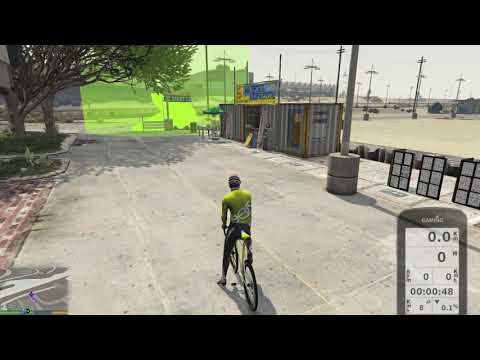