4 Floating Motors La Dolce Is Just Like the Fiat 500, Only for the Sea

5 The Shape Superyacht Concept Has Gaping Hole in the Superstructure, Plenty of Attitude
Car video reviews:
Up Next

What would a Ferrari look like on water? Not a real one, of course, because it would sink, but the maritime equivalent of one. The Gran Turismo Mediterranea (GTM) wants to be the answer to that question.

As far as dreams go, you can’t get any wilder than Lazzarini Design, the Italian design studio responsible for some of the most outrageous and lavish creations in the maritime industry. Lazzarini also does automobiles and floating residences, which makes any of its creations a perfect fit for this magical month’s theme on autoevolution, Celebration Month, the 2021 edition.

The latest concept from the design studio is the perfect dream machine for the very rich (hypothetical) owner, a Ferrari-inspired hyperyacht that pays tribute to the instantly recognizable design language of the storied Italian carmaker, with room to spare for an actual Ferrari in the rear. It’s a Ferrari-like hyperyacht with a real Ferrari. Ferrari-ception, if you will.

GTM stands for Gran Turismo Mediterranea, which “underlines the capacity of the yacht to cruise at elevated speeds with extreme sailing comfort,” Lazzarini says of the concept. This is also why it’s called a hyperyacht, since it’s perfectly capable to soar at incredible speeds of 70 knots, but in maximum comfort and luxury to guests onboard.

Powered by triple MAN V12 engines, an Arneson transmission and a central Hamilton Jet drive, GTM would use the jet for thrust in acceleration and turning at high speeds. Maximum speed would be attained by deploying the wing foil in the transformable hull, since the GTM is partly a hydrofoil. Deploying the foil lifts the hull partially out of the water, decreasing resistance and making for an overall faster and smoother ride.

Lazzarini says that GTM is perfectly capable of cruising at speeds of 35 knots with the cabin doors, which open upwards like gullwing doors, open. This helps with the impression that GTM is Ferrari’s bigger marine brother, as does the carbon fiber superstructure painted in the expected shade of Ferrari red. “We tried to imagine how a Ferrari of the seas would look like,” the design studio says. And it clearly lives up to whatever expectations a Ferrarista might have.

The cockpit is racing-inspired, from the color scheme to the pilot seats and the controls. The silhouette of the hyperyacht, from the bow to the rear multiple exhaust system, is clearly a Ferrari tribute. Lazzarini makes no attempt to hide the lineage of this concept boat, because its highest selling point lies precisely in the fact that it is, as they put it, a Ferrari of the sea.

GTM is 27 meters (85.5 feet) long, 6.3 meters (21 feet) high, and has a beam of 6.7 meters (22 feet). Compared to other concepts we’ve discussed recently, even those coming from Lazzarini, it is on the smaller side, but it still offers luxurious accommodation for four guests and three crew members. Guests have two twin cabins at their disposal on the main and lower deck, while staff is quartered in the two cabins below deck. There’s also an atrium lounge right behind the pilot cabin with two comfy-looking sofas on each side, just perfect for casually hanging out, as well as a formal dining area on the main deck. The bow is accessible by a set of hidden stairs, though probably not the best place to be at 70 knots.

Perhaps the most striking space on the GTM is the rear platform, which can be fitted either as a sundeck or as a supercar garage – for your Ferrari, what else? In the latter case, the platform can extend upwards and outwards, helping to bring the Ferrari on the dock at the press of a button, so that it’s ready to drive off right away as you set foot on solid ground again. In the former, it can be packed with lounges for tanning, as well as a set of stairs for direct access to the water.

GTM is not a superyacht packed with insane amenities, pools, gyms and movie theaters, but it’s nonetheless luxurious and visually striking, with its sleek and powerful lines. Designed for speed and comfort, it would be perfect as a secondary yacht for the rich seafarer, the kind who wouldn’t even consider going to shore without his most prized Ferrari.

Like most Lazzarini projects, this too could be built if the right person came along, and they just happened to have the right amount of money for it. It is a dream, alright, and a good-looking one at that. 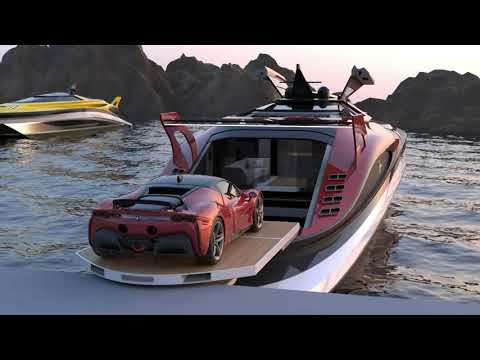