2 There's a Gran Turismo Movie in the Works - It Has a Plot, Release Date and Director

Home > News > Videogames
2 Aug 2022, 01:22 UTC ·
by Cosmin Vasile
The Gran Turismo series was always about excellency, so it’s no surprise that developer Polyphony Digital has just announced a collaboration with none other than Dior, the famous French luxury fashion house.
8 photos

The collaboration was announced over the weekend at the World Series Showdown in Salzburg (Austria) and will be available starting August 25. Before you set your expectations too high, it’s worth mentioning that the game will only be getting one new car later this month.

But that’s not the only thing that Gran Turismo 7 players will be getting out of this collaboration. Come August 25, new and exclusive Dior racing gear that can be applied to a player’s driver avatar and a customized vintage car, the De Tomaso Mangusta, will be up for grabs in-game.

All the gear added as part of the collaboration has been specially designed by British fashion designer and Artistic Director of Dior men’s collections, Kim Jones. As per the French company’s statement, “the collection highlights Dior’s unique design hallmarks in a virtual space for the first time.”

To be more precise, the Dior-designed racing gear collection will consist of a yellow and gray racing suit, matching gloves, reinterpreted “Diorizon” shoes, and a blue and gray helmet. Additionally, a special number 47 has been incorporated into the design to commemorate the date of Christian Dior’s inaugural fashion show in 1947.

The icing on the cake is a customized vintage car, the De Tomaso Mangusta, which will be available for Gran Turismo 7 players later this month. It’s unclear how you’ll be able to get the car and the items or whether or not some of them will cost in-game credits.

In any case, if you can’t wait for the collab to go live, all these items and the special edition De Tomaso Mangusta will be available starting August 25. 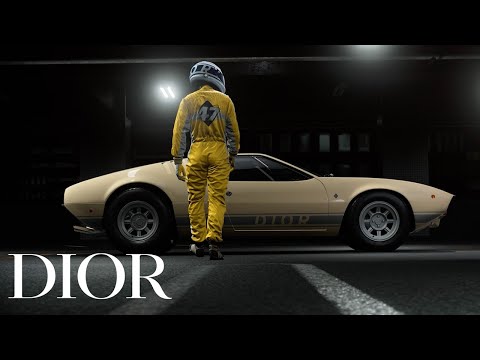