5 There's a Gran Turismo Movie in the Works - It Has a Plot, Release Date and Director
Car video reviews:
Up Next

Home > News > Videogames
Cosmin Vasile
Gran Turismo 7 fans rejoice as the folks at Polyphony Digital have just released the September update. After teasing the contents of the update last week, the studio has finally taken the wraps off the three new cars joining Gran Turismo 7 this month.
6 photos

First off, we have the Volkswagen ID. R ’19, the prototype EV known for breaking records. The car set the record for the fastest lap by an EV at the Nürburgring Nordschliefe and set a record of 7m57s at the 2018 Pikes Peak Hill Climb.

Also, at the Goodwood Festival of Speed, one of the fastest EVs in the world became the first to ever finish the legendary hillclimb in under 40 seconds with a record of 39.9s.

Finally, the Porsche Vision Gran Turismo Spyder combines elements of the traditional Porsche sports cars with race car genes of the 919 Hybrid and the German manufacturer’s first electric sports car, the Taycan. The chassis is made of state-of-the-art carbon fiber and is powered by two electric motors. The sports car promises to deliver a system power output of 820 kW (1,098 BHP) and a maximum torque of 1,090 Nm (804 lb-ft). 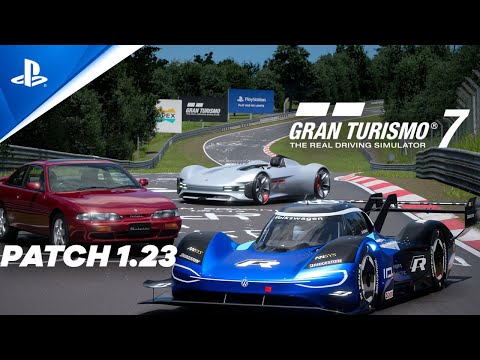