3 There's a Gran Turismo Movie in the Works - It Has a Plot, Release Date and Director

Home > News > Videogames
28 Jul 2022, 00:48 UTC ·
by Cosmin Vasile
Teased late last week, the latest Gran Turismo 7 update will be available to download for free on PlayStation 4 and PlayStation 5 on July 27. As expected, the update adds three new cars, including a legendary one, as well as a couple of new Scapes that you’re probably going to love.
15 photos

If you love sports cars, we have great news for you: all three cars included in the update are made for speed addicts. The Maserati A6GCS/53 Spyder ’54 is a stunning 2-seater classic racing car that won the 2014 Gran Turismo Trophy. One of the many 6-cylinder racing cars manufactured by Maserati from 1947 to 1956, the A6GCS/53 Spyder was intended for sports car championship competitions.

Next, we have the Porsche 918 Spyder ’13, a much more modern-looking 2-seater sportscar, which is seen as a reinterpretation of the Carrera GT. Introduced by Porsche back in 2011, the Porsche 918 Spyder is a plug-in hybrid featuring a 599 BHP 4.6L V8 engine based on the engine from the RS Spyder prototype race car. The speedster is advertised as having a top speed of 214.4 mph (345 kph) and remains in the top 10 fastest lap times on the Nürburgring Nordschleife.

Last but not least, the legendary Nissan Skyline Super Silhouette Group 5 ’84 is joining Gran Turismo 7 as one of the most iconic cars from this series. The main highlight of the car is the chin spoiler that extends far forward of the vehicle and the fenders that are enlarged to extreme levels in both the front and rear.

Powered by a 2.1-liter 4-cylinder turbocharged racing engine called the LZ20B, Nissan’s classic car was famous for spitting flames out of its exhaust located below the left-hand door.

Apart from the three sports cars, patch 1.19 brings a new Curation to Scapes, featuring Shikoku and Tomica Town. The brand-new Scapes are famous locations in Japan and are meant to offer players the chance to capture some stunning photos. 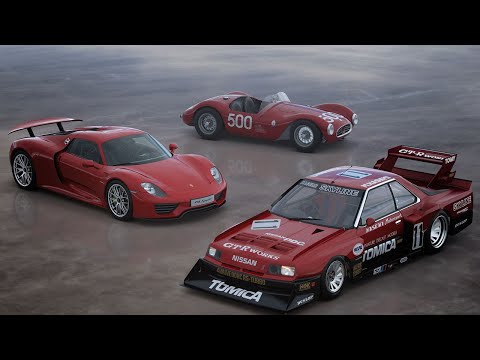