Daniel Patrascu
It’s been a busy week for auction house Mecum, whose event in Glendale concluded with mountains of money spent on several high-profile cars. Without a doubt, the star of the sale was the matching numbers 1967 Chevrolet Corvette L88, which managed to snatch an impressive $2,695,000.
21 photos

In all, the auction’s top ten best-selling vehicles (including the said Corvette) went for a total of $7,491,000, making the entire event a mammoth one. A rather small amount of the total, but an impressive one nonetheless, was spent on the 1970 Ford Mustang Boss 429 we have here.

$385,000 is how much someone paid for it, a great deal over the most optimistic estimate that placed the car’s value at $300k before the sale.

The Grabber Green over black example wears Kar Kraft serial number 2337 and was until last week part of the Steve Todhunter Collection. The car is powered by the legendary Boss 429 engine Ford fitted in the Mustang for NASCAR homologation purposes. At the time of its making, it was rated at 375 hp—the powerplant was, of course, capable of developing more than that.

Inside, it comes with things like bucket seats, the Convenience Check Group auxiliary lighting, and wood-grain trim. The odometer shows 57,884 miles (93,155 km) of use.

The buyer's identity was not made public. Still, judging by the way things usually go with such cars, the Mustang will probably spend some time in a collection somewhere before popping up again, looking for someone willing to pay even more for it. 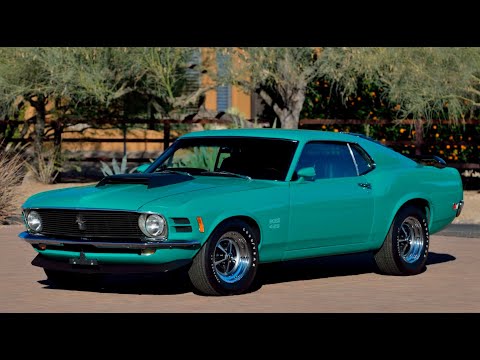