Public roads are not race tracks! You'll never be able to extract the full potential of your car when driving around town or even outside of it. It's not safe for you, and it isn't safe for other people as well. So I always applaud the initiative of those that take their time to organize track days and bring petrolheads together for a good old fashion challenge.
13 photos

Drag racing can be quite fun, but it's only fun for about 10 seconds, depending on the cars involved. With Time Attack, things last a bit longer than that. And this sport is a good way to showcase the driver's abilities and the full potential of their car. For about 90 or so seconds, everything is being pushed to the limit. Moreover, the slightest mistake can ruin your lap time and end your chances of winning the challenge.

Tobias Welti is the organizer of the Speed Industries Trackday Battle events. Aside from his drifting activity, he likes to bring people together at the race track. He has put together events in several locations before, but the Anneau Du Rhin circuit is sort of like his home base. The cool thing about this track is that it is located at a crossroads between France, Switzerland, and Germany.

This way, it is easy for drivers from all three neighboring countries to join the events and duke it out on track. And you'll never feel unimpressed by the line-up of cars in the paddock. You should expect to see everything from flashy old JDM machines to brand new supercars. The last time when we saw a Time Attack challenge from Anneau du Rhin, a turbocharged Mazda MX-5 went up against a BMW M3 CSL and a Lotus Exige 430 Cup.

As you'd expect, the track weapon, which is the Exige, managed to set the fastest time of the day. It went through the 1.86 miles (3 km) layout in just 1:21.204, which was about 3 seconds faster than the M3 CSL and 5 seconds faster than the MX-5. For today's challenge, a Lotus Exige 420 Sport will be competing against a Toyota GR Yaris and a Honda Civic Type R FK8. While it's not indicated to jump to any conclusions, you can't deny that there's a crowd favorite here.

Phil from Rotheli Racing is driving the GR Yaris, and he's already done a few mods to it. Coming from a world of Time Attack racing and hill climb racing, he couldn't just keep the car stock, could he? His nimble little Toyota is now rated for about 280 horsepower. And it has also shed some weight, now sitting at 2,755 lbs (1,250 kg). Phil spared no expense with this car, installing an Öhlins suspension, so it should be quite fast around the corners.

I've met Joe Kradolfer about a year ago, and I knew that he was driving an Exige, but I'd never really seen him in action before. His Lotus is packing a supercharged 3.5-liter V6 engine that's capable of 420 horsepower and 315 lb-ft (427 Nm) of torque! With a weight of 2,447 lbs (1,110 kg), this thing should be shockingly fast around the track. It's hard to believe that any of his two opponents will be able to come close to his lap times.

Last but not least, we're looking at Alex and his Honda Civic Type R. This is no longer a stock vehicle, and it might still have a word to say in today's battle. The Japanese hot-hatch is now rated for about 500 horsepower and 457 lb-ft (620 Nm) of torque, but let's not forget about the fact that it's an FWD vehicle that weighs about 2,976 lbs (1,350 kg). We're not going to spoil the outcome for you, so the question is, who do you think won this challenge? 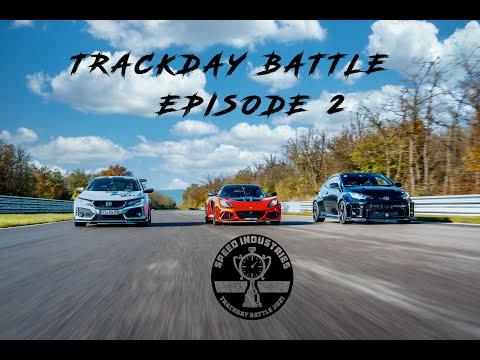