1 Bugatti Chiron Gets 1955 Chevrolet Face Swap, Is Anyone Twisted Enough to Actually Do It?

4 Two Toy Volvos Were Hurt in the Making of This Video, One Becomes Trailer for the Other

It was back in 2019 when Toyota revived one of its most iconic car models ever, the mighty Supra. It’s a car that traces its roots back to the 1978 Celica Supra, is related to the BMW Z4 born in 2018, and was for a long time after its launch one of the most in-the-news car models in existence.
12 photos

Enough time has passed since the car was launched for it to have been modified in some incredible ways, both in the real and in the virtual world. Sure, owning one is not exactly cheap, given how the entry-level, the 2.0, starts at $43,540 (and, for the record, the top-of-the-range A91-CF Edition retails from $63,380), but enough people out there found the resources to own and mess around with one.

For those unable or unwilling to spend that much money on such an iconic car, then ruin it with some custom job, there’s always the toy world. Hot Wheels, for instance, started making its own variant of the GR Supra in 2021, and just like it happens in the real world, the stock toy just isn’t enough for some people.

Like the guy from Jakarta Diecast Project (JDP), who in mid-June let the full weight of his talent fall upon the unsuspecting Hot Wheel, and manifest itself in the form of a hycade body kit.

For those of you out of the look, hycade is a digital designer so famous that he started a trend in the custom industry. Although body kits wearing his signature are yet to manifest themselves in the real world, the digital projects, often portrayed in photorealistic settings, have inspired many.

JDP seems to be a big hycade fan, and he treated us recently with several diecast builds inspired by this, including the Supra A80 or the Nissan Skyline GTR R34.

This time, the hycade bug touched a GR Supra, and the stunning result can be admired either in the gallery attached to this piece or in the video below. 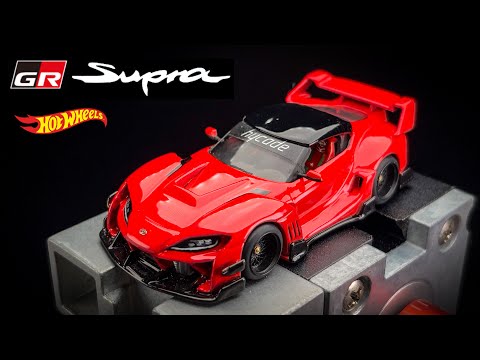