Day after day things get thrown away, not even so much as being considered for recycling. Well, some people seem to make it their life’s mission to repurpose things. Like, say, beer kegs?

Got an Empty Beer Keg? Why Not Transform It Into a DIY Bicycle Cargo Sidecar?

Sure, that last bit may have left you with more questions than answers, but it seems that Laura Kampf, an engineer whose work you’ve witnessed before here on autoevolution, has made it a sort of mission to come up with new and exciting ways to transform and repurpose objects in ways few could have imagined.

As an example, in one of her projects we witnessed an off-road bike trailer made from nothing more than two wheelbarrows. Sure, there was some cutting and welding involved, but the result was quite the capable bike trailer.

This time around we witness Laura taking a used-up beer keg and transforming it into one of the most simple and twisted cargo sidecars I've seen for a bike. Sure, you’ve probably seen stuff like this in some cartoon from back when you were a kid, but this is real life. Here, it takes planning, cutting, welding, hammering, banging, and a whole lot of sweat to make something this happen.

Best of all, if you follow the steps in the video below, have the tools needed, and use a bit of ingenuity, you too can make your very own beer keg bicycle sidecar just like the one here, maybe even go a bit further and personalize it.

To do this you need a keg, obviously. How you get one is none of my business, but if you have a friend who works in a bar or local brewery, I'm sure you can pick one up for a few bucks. Try your local junkyard too.

Up next you’ve got to eliminate the pick-up tube, make the measurements needed, and cut a part of the siding with a hand-held metal saw. Once this stage is complete, a frame is set into the opening and ends sealed off with some steel plating. Throw on some hinges and a diamond steel plate for a lid and the keg is done. What, you wanted to work more than this?

Part two of the story is all about creating a chassis for the keg, and more importantly, how it will affect the bicycle’s movements overall. First, a frame is completed to which the keg and a third wheel are added, but then this frame is to be connected to the bike.

Well, this is where things get a bit tricky. In order for the sidecar and bike to move independently to one another, a system of rods and ball pivots is put into place. What this does is offer not only a comfortable ride but also a safer one. However, this pivoting is only affected when the bike leans to the left or right, so don’t worry about the sidecar being left behind as you ride off. To reduce some vibration, a large rubber hitch is added where the chassis and bike are connected.

What you’ve just read is just so that you have an idea of what to expect in case you, too, come across a beer keg and feel like getting crafty. One option is this bicycle beer keg sidecar, but as I mentioned earlier, you’d better have the tools as it’s not going to be an easy DIY project, but definitely a fun one that’s sure to get the looks and questions you want. 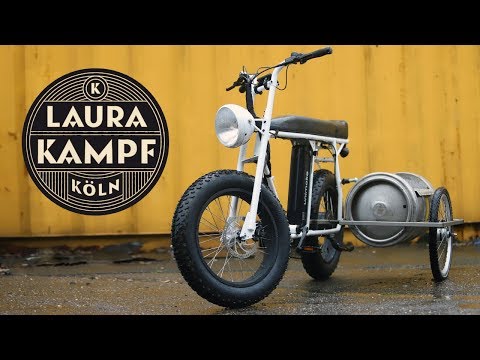