The Nordic Beowulf, a Dual-Body Amphibious Machine Ready to Conquer Any Terrain

Gorgeous Porsche Taycan “Queen of the Night” Artcar Sells for $200,000

For its second collaboration with Porsche, artist Richard Phillips has created a very special and very gorgeous Taycan 4S named “Queen of the Night.” It sold at auction at RM Sotheby’s for the equivalent of $200,000, all of which will go to charity.
11 photos

The April sale of the “Queen of the Night” Artcar was announced last month, without a price estimate. However, Porsche did say that all proceeds would go straight to charity, to non-profit Suisseculture Sociale, to offer relief to artists affected by the ongoing health crisis. In the latest release, the carmaker notes that the entire amount of nearly $200,000 would go to the organization, since Porsche, RM Sotheby’s and Phillips agreed to waive all associated fees and costs.

The “Queen of the Night” was completed at the end of 2020, in a live event. It is based on Phillips’ artwork of the same name, which, in turn, was inspired by the works of Swiss landscape artist Adolf Dietrich, and then transferred to the Taycan 4S body by SIGNal Design.

Not that this wasn’t enough to truly make it stand out, but it also come with extra customizations by Porsche Exclusive Manufaktur. These include “Queen of the Night” inscriptions in the door sill panels, and projectors that illuminate the underfloor with Phillips’s signature when the doors open. An exclusive individual tour of Stuttgart-Zuffenhausen was offered with the auction lot.

Since its completion, “Queen of the Night” was displayed outside the restaurant Leuehof, where the live event took place, and then at various Porsche Centers around Switzerland. It will continue to remain on display until delivery to the new owner. It sold with 150 km (93 miles) on the clock, on an as-is, where-is basis.

As noted above, this is Phillips’ second collaboration with Porsche on an Artcar. The previous one was in 2019, a Porsche 911 RSR, that went on to become the first Artcar ever to win the 24 Hours of Le Mans. 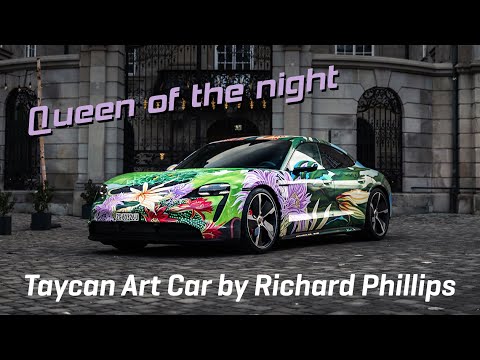