1 Love or Hate Them, McLaren Supercars Have Swagger on Custom Forged Wheels

5 Rowan Atkinson Reminisces About His Favorite Car, a McLaren F1, That He No Longer Owns
Coverstory

Alexandru Boghiu
Having spent over 50 years in the automotive industry, Gordon Murray is an engineering and design genius who has always wanted to be a racing driver. However, he couldn’t afford a car, so he built his own, which sparked his interest in design. His massive car collection includes a lesser-known Ford Escort MK1 restomod.
19 photos

The South African-born British engineer didn’t rush to take the car out on the street, choosing to enjoy the process of building it instead. It all started with an original right-hand-drive shell from South Africa, which was in such a bad shape that you could see the road through the passenger footwell.

“When this came out, I didn’t ever own one, but I always loved the fact that it was compact and good-looking…it was a highly-successful, high-volume car, but it was also very successful at racing and rallying,” says Gordon.

It literally took years of work to turn it into what it is today – a practical car built for everyday use that the former McLaren Technical Director drives to work. “It’s not blindingly quick, but it’s quick enough to have a bit of fun,” he says.

Under the carbon fiber hood there’s a Cosworth-built 2.3L Duratec engine that puts out around 250 hp (253 ps), neatly arranged inside the uncluttered engine bay. It’s also paired with a 6-speed Mazda MX-5 gearbox. As a nod to the gold foil on the McLaren F1, there’s a golden triangle section on the underside of the hood.

The car features 13-inch wheels, Yokohama tires, bespoke dash and gauges, and even a heated driver seat. However, it only fits a single passenger (in our case Fifth Gear's Jonny Smith), as the rear seats have been removed.

“The MK1 Escort is an amazing motorcar because so many people have stopped me and said ‘That was my first car,’ or ‘That was my dad’s first car’…It’s what I call a sort of a nostalgic motorcar,” Gordon said.

Press play down below and enjoy the video as Gordon and Jonny take the car out for a spin and chat about the ins and outs of having it built. 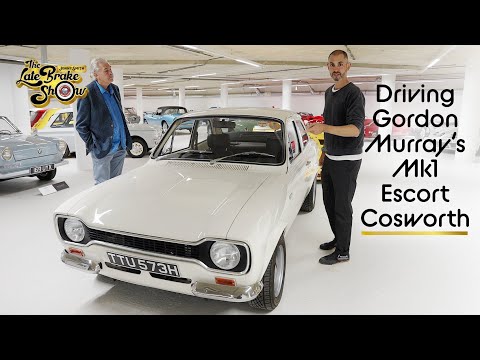