Gordon Further Damages His Back in Violent Crash at The Glen 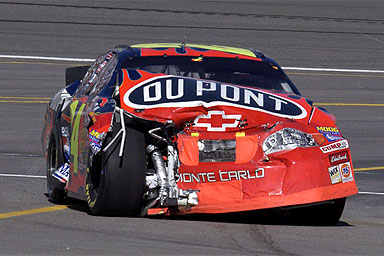 Although king of the road-courses in the NASCAR series, Jeff Gordon couldn't have prevented what happened to him on Monday afternoon, at Watkins Glen. Returning to the track where he won no less than 4 times in the past, the 5-time Sprint champion crashed out with only 27 laps remaining in the race and further damaged his back.

It was Kasey Kahne's Dodge who caused this whole mess in the first place, as he forced Sam Hornish Jr. off the track (to the outside) and right into the tire barriers. After the impact, Hornish's car was pushed right back to the track, where it hit the unfortunate Gordon.

Although the Hendrick Motorsports driver walked out of his No 24 Chevrolet on his own two feet, the afternoon did not prove that lucky for Gordon. He was immediately taken to the infield hospital, where he admitted he started feeling even more pain on his lower back. It was the same part of his body that was MRI-ed and given treatment to less than 3 months ago.

“I'm hurting. It's not what I needed, you know? You take three or four steps forward to this point, and you take a hit like that and take a couple of steps backward. Nothing else hurts. Everything else is good. Just the back,” admitted Gordon, who was just on his way to making a decent recovery from his back problems.

Gordon was not the only driver affected by the incident, as Sam Hornish's car was practically airborne after hitting the Hendrick Motorsports driver. While spinning into the air, the No 77 car suffered its next and last hit from Jeff Burton, who had no other place to go but into Hornish's Dodge.

“It's unfortunate. I'm just really thankful that we do all the precautions that we do, and make the cars as safe as they are. I thought hitting the tire barriers was going to be the tough one. I didn't think I was going to get hit by two more cars. It was a rough day for us, a rough week for us,” admitted Hornish.

According to NASCAR.com, Hornish also sustained a slight injury as a result of the crash, “banging his knee and hand.”