1 Cozy, DIY Skoolie Has a Chef-Worthy Kitchen With a Secret Storage Space for Spices

3 Duchess Tiny House Is a Rustic Paradise in Teal, Comes With Two Lofts and a Fireplace

4 Baleia Tiny House Is an Off-Grid Wood Cabin on Wheels, Cozy and With Two Sleeping Lofts

For all its merits and benefits, downsizing does come with compromises, particularly regarding the new, smaller floorplan. But what if it doesn’t have to be that way?

Whether downsizing in a van, a skoolie conversion or a tiny home, switching to a smaller floorplan will mean, without a doubt, having to pick new priorities and discarding the superfluous. At times, even basic stuff like proper kitchen appliances can fall into that “superfluous” category; at others, creature comforts like a dry bathroom, an office space, or a room to lounge in will have to be sacrificed in the name of mobility.

For people who don’t want to cut down on creature comforts, options do exist and no, they’re not limited to not downsizing. U.S.-based Custom Travel Homes aims to fill that small niche in the market, and Vulcan, their flagship model, will fill this “new elite hybrid sector in the RV industry.” Yes, we’re talking about high-end, luxury tiny houses, designed by the likes of Julia and Robert, founders of Custom Travel Homes and builders of Vulcan as a personal experiment, which has since been turned into a new business.

As Robert explained in a 2020 video tour with Jenna from the Tiny House Giant Journey (see the video below), the CTH tinies are not for everyone but that doesn’t mean that they’re impossibly priced. On the contrary, he points out: for the empty-nesters with a lifetime in the workfield and, presumably, some money put aside, they are affordable. Just as importantly, they afford a lifestyle similar to the one they had before this big change.

Julia and Robert built Vulcan on their own, after deciding to start traveling more. They first looked at RVs but discovered that they always had to make some kind of compromise, regardless of what model attracted their attention. So, they got to work to design their perfect RV, which turned out to be a gooseneck, 300 square-foot (27.8 square-meter), two-loft tiny house. A tiny mansion, you could say – and you probably will, once you’ve seen this video.

This is a tiny built with no compromise and no expense spared. The layout, with the exception of the gooseneck exterior, is a basic two-loft one, with a kitchen and bathroom on the lower floor. But everything else makes Vulcan stand out, from the premium appliances, to the finishes and furnishes, and the fact that everything, down to the lights and window curtains, is automated.

Vulcan is 34 feet (10.3 meters) long and sits on a triple-axle trailer. The tow vehicle is Volvo 780 Semi conversion, on whose bed the couple carry an electric Smart car and storage for stuff like their ski equipment and extra tools. The tiny has a steel frame and is designed to sustain extended traveling at high speeds.

Offering a total of 300 square feet (27.8 square meters), Vulcan includes a full-size kitchen that opens completely to the outside thanks to the triple-fold doors. “Full-size” doesn’t exactly begin to describe it, since the kitchen is perhaps fancier than most kitchens in actual homes: it even has a pot filler, dishwasher, a baking station, a coffee station, and a steam oven for artisan bread. The wood-burning stove provides heat during cold days (there’s also radiant floor heating and a two mini-splits for that), but doubles as a pizza oven.

The bathroom comes with a sizable standing shower decked in mother-of-pearl, a separate toilet room, storage in the ceiling, sink and vanity, and a washing station with a washer and a drier.

The bedroom has a queen-size bed and a wardrobe, with additional storage in the floor. The lounge at the opposite end sits lower than the bedroom, so it offers standing height. There’s a U-shaped couch with a table in the center, offering seating for up to eight people. At night, the same couch can turn into another queen-size bed.

Robert’s office is on the floor of the lounge, but outside of the area. It’s a stand-up desk with a secret wine cellar underneath, a stowaway bar table. The screen he uses as his computer monitor sits on an elevating platform that rises and swivels it, so it becomes the TV screen in the lounge. From the lounge, you can move to the roofdeck, where there’s sitting for two. There’s another deck that attaches to the kitchen, and which can be stowed under the trailer in pieces.

Vulcan has 1,800 W of solar panels on the roof and four Tesla Model S modules under the stairs to the lounge, and this setup is enough to run everything inside. Neither Julia nor Robert go into specifics of autonomy of the tiny, except to say that they like to spend about one month in each location, to really be immersed in it.

As of the moment of press, Julia and Roberts are traveling across the U.S. in Vulcan, doing tours and conference talks. Custom Trailer Homes offers units starting at $300,000, depending on what goes in them, with delivery taking 6 to 9 months. Vulcan was around $125,000 in materials alone, but only because they built it themselves: a note on the CTH website says that a similar tiny would be approximately $400,000.

This unofficially makes Vulcan the most expensive tiny house in the world. 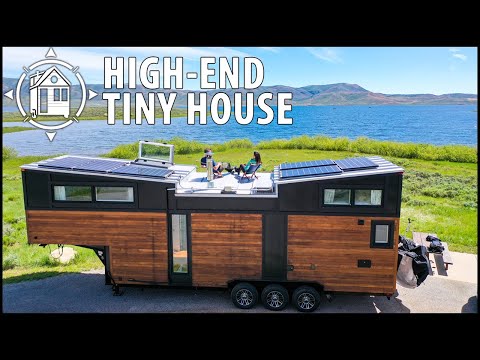