1 Android Auto and Apple CarPlay - What Do They Do, and Are They for You?

4 Porsche Reportedly Said “No” to Android Auto As Google Asks For Confidential Data, Google Denies It

Google Updated Android Auto, It's like an OEM Interface Now

Home > News > Technology
Sebastian Toma
Google is continuously developing the Android Auto interface, and the company has just launched a new version of the system.
1 photo
This time, the Android Auto system is capable of integrating in-car features into the unit, like climate control, AM/FM radio, and digital instrument clusters.

Google unveiled the latest novelties of its universe at its annual I/O developer conference, along with the new Android N. The latter will allow the tech giant to provide automakers with a more capable infotainment unit, which would be easily integrated into an automobile, instead of the issues encountered by early adopters.

Slowly, Google is transforming its Android Auto technology into a standalone platform for cars, not just something to connect your phone to while in a car. Speaking of connectivity, the company will finally enable wireless connection between the user’s smartphone and the system, as the current version requires a cable.

The Mountain View giant also showcased a concept of the new Android Auto interface, which was placed in a Maserati Ghibli, Automotive News reports. The car had a 15-inch multimedia screen, complete with a high-definition digital instrument cluster.

The processor behind it all was a Snapdragon 820 chip from Qualcomm. Quick translation for Apple users: that chip is the flagship from the supplier, and some claim it’s faster than the Apple A9 and Samsung’s Exynos 8890.

Furthermore, the biggest news from Google’s conference was the fact that Android Auto will be available in the form of an app. This would allow Android users with older-model cars to benefit from the hands-free part of the experience by mounting their phones on individual (third-party) windscreen holders or in the dash.

While Android and iOS users already have access to Google Maps and other apps while driving, the new Android Auto interface will be optimized for safe usage when the customer is behind the wheel. Naturally, it won’t work on Apple’s iPhone range, as it is an Android-exclusive for the time being, and possibly forever. However, in the tech world, one must never say never. 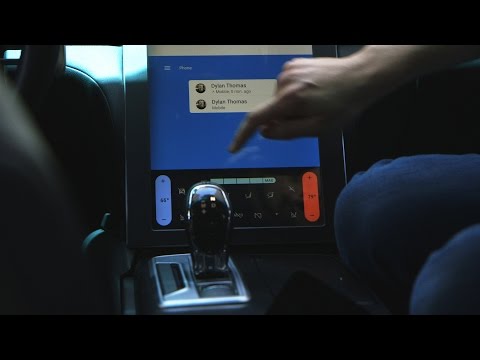