5 No Need to Switch to Waze: How to Fix Google Maps Freezes on Android Auto
Car video reviews:
Space Junk

Most people know Google Maps as the navigation app that is supposed to provide instructions to help them drive from where they are to where they want to go.

And at some level, they’re not wrong, as Google Maps continues to be one of the most advanced navigation solutions currently on the market.

But on the other hand, Google Maps has evolved to become a complex platform whose capabilities are expanding well beyond the navigation component. It’s a service that comes bundled with features that help people connect, explore new places, travel safer, and get information on businesses in a matter of seconds.

It’s not a secret, however, that Google rivals have been investing in Google Maps alternatives for quite some time. And in the last few years, the work on this front has gained more pace, so right now, finding a piece of software whose role is to replace Google Maps shouldn’t take more than a minute.

Google, however, hasn’t been sitting and watching others have fun. The search giant has been working on all kinds of new capabilities, such as the eco-friendly routes, that prepared Google Maps for the modern world.

And this week at I/O, Google has made a very good case for not giving up on Google Maps.

The company announced the so-called immersive view, which is pretty much the “most” next-generation way of exploring a certain place, all combining assets that Google Maps already comes with.

Immersive view is a combination of satellite imagery and Street View photos, so it’s supposed to allow you to explore a certain place just like you’d be there. You can essentially look over a location thanks to high-resolution satellite images and then, when you want to see more details, switch to the street level where Street View content is loaded.

The two parts are seamlessly combined, so the experience overall feels extremely futuristic.

But here’s where the craziness begins.

Google Maps uses all its resources to make the immersive view as advanced as possible, so overlays like busyness and traffic information are also available. In other words, if you’re trying to see the traffic conditions on a certain street, immersive view allows you to do that using computer-generated images that simulate the actual conditions in real-time.

It’s like playing a video game, and the same experience is available for pretty much any location on the map, be it a street, a park, or a shop.

Google says the immersive mode will help people make informed decisions, so for drivers, it should make it a lot easier to figure out how crowded the route they plan to use is going to be.

And that’s not all.

The immersive mode also comes with a time slider, which lets you explore the same regions at different times of the day. In this case, however, certain data like traffic information will be based on historical patterns.

Without a doubt, the immersive view is going to become one of the most popular features in Google Maps, and the search giant itself knows that people are going to love to explore new places with the help of this new tool. This is why it’s making it available on all platforms where Google Maps can already be accessed, including PCs and mobile devices.

For the time being, however, the immersive view will only be available in a limited number of regions, and it’s not hard to understand why. It takes time to reach broad availability given the insane amount of data that needs to be processed.

Scheduled to launch later this year, the immersive view will originally debut in Los Angeles, London, New York, San Francisco, and Tokyo. Google, however, says it’s already working on bringing it to more locations across the world. 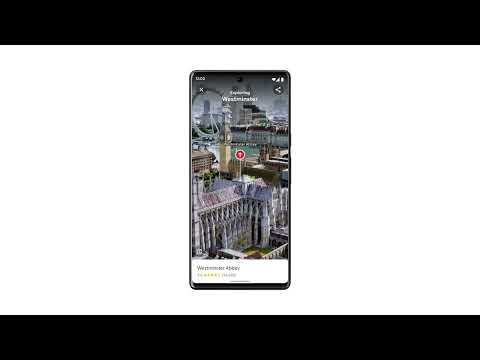