With camera and performance measurements technology readily available at a fraction of the cost from just a few years ago, it’s no wonder that automotive-related vlogs have exploded during recent times. It also helps when automakers increasingly rely on this type of communication, and they’re willing to lend some of their most prized possessions. But what happens at the other end of the spectrum?
21 photos

Owen, Stu, and Nick are the very relaxed hosts of the Motor Addicts YouTube channel, and they have only recently celebrated their 5,000-subscriber anniversary. To put that into perspective, a much more famous British automotive vlogger such as Shmee150 has more than 2.27 million subscribers and counting.

But that’s all right because sometimes we feel the need to bring down our expectations. Such is the case here, with the trio just making their acquaintance with the cool Dragy GPS Performance Box, a measurement tool that’s virtually critical to the success of certain YT outlets such as the cool AutoTopNL channel.

Because they’re not that renowned to get access to all the great supercars out there, they rely on their own rides for the sometimes hilarious, sometimes scary (you’ll see what we mean at the 6:15 mark) content they provide.

But here’s the fun part. The mix of cars is so eclectic it’s bound to deliver all sorts of surprises. That is because the hotchpotch includes a fairly tuned all-wheel-drive Volkswagen Golf R Mk7, a Megane II-based Renault Megane RS F1 hot hatchback that’s FWD and runs on competition tires in the British weather, as well as a vintage (it’s said to be 25 years old) Toyota Celica GT-Four.

As they set out for the zero to 60 mph (96 kph) trial (on public roads, which is something we don’t support), the first one to come out to play was the French representative, putting its mid-2000s expertise to practice for the best result of 6.93 seconds (from the 1:35 mark).

Next up came the much younger Golf R hot hatch, which should have aced the test due to its AWD and alleged modifications... but only managed a 5.58s run from the 3:15 mark. That’s all to be expected, but frankly, we’re actually rooting for the beat-down Japanese ride that was once the master of all things WRC. And we’re not even disappointed by its 10.7s result since the vintage Toyota gets to survive for a little while longer. 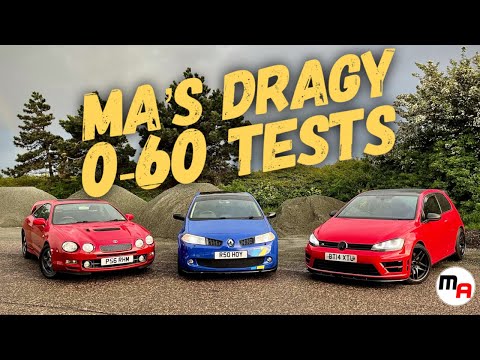