When it comes to Japan's auto culture, there is no magazine that tells the story better than Best Motoring. What? That doesn't sound familiar to yoo? Well, hold on tight, because you are about to enroll on a crash course in Japans freaky automotive realm. P.S.: it involves some MINIs as well.
1 photo
What you need to know at this point goes like this: Best Motoring debuted in 1987 and lasted until 2011. In addition, what made it so notorious was the approach on videos - yes, they also did that - was all about non-traditional races and challenges such as the so-called Toge battles, in which one car tries to outrun another on a twisty mountain pass.  Need For Speed Carbon duels much?

Anyway, the drivers starring the video series were top-class racers that came from various Japanese racing series, as the JGTC, D1 Grand Prix and Formula Nippon. Now, Evo thought of an original way of celebrating Best Motoring and did just that, after changing the rules of the game a bit. That is, four drivers and four cars were pitted against each other in the most andrenalin-pumping track battle between MINIs. So they say.

In case you might be interested in the big names starring this video, here's a brief presentation: Andy Wallace is driving a 2006 John Cooper Works GP, Marino Franchitti is at the helm of a R56-based 2013 John Cooper Works GP, Dickie Meaden rides a race-prepared second-generation MINI Challenge JCW and Jethro Bovingdon completes the lineup with his third-generation MINI Challenge S275.

In an attempt to keep you both entertained and eager to see the video, we'll just say that once you click that play button, get ready for a combo of MINI racing madness and classic track action. Just like you're playing Jumanji. 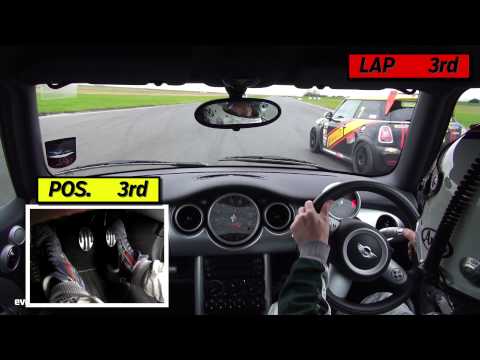