5 Harley-Davidson LiveWire Drag Races at NHRA U.S. Nationals, Who Was Impressed?
Up Next

Mircea Panait
For the 2021 model year, three of the best front-wheel-drive hot hatches come in the guise of the Civic Type R Limited Edition, Golf GTI Clubsport, and Megane RS Trophy. Although quarter-mile performance is a little superficial in the context of corner-carving machines developed for enthusiasts, the following vid pits these cars in a straight line.
9 photos

On paper, the Renault appears to be the underdog. It features the smallest engine of the lot (1.8 liters), and the output is pretty good for its displacement (296 horsepower or 300 PS and 310 pound-feet or 420 Nm).

From 2.0 liters, four cylinders, and a spinning snail, the Civic Type R Limited Edition promises 316 horsepower (320 PS) and 295 pound-feet (400 Nm) of torque. The wackiest-looking hot hatch of the three is the lightest of the lot at 1,358 kilograms (2,994 pounds) in this specification.

Because only 20 examples of the breed are coming to the United Kingdom, the Type R in Limited Edition flavor is a little peppered at £40,000 or $56,460 at current exchange rates. It’s also worth highlighting the six-speed stick shift offers more engagement at the expense of acceleration to 60 miles per hour (97 kilometers per hour), and quarter-mile performance also shows the limitations of a good ol’ manual transmission over a fast-shifting DCT.

In rainy conditions on a soaked runway, the Golf and Megane hook up better than the Civic Type R does. The GTI Clubsport keeps on stretching its legs as the Honda gains precious ground, and the Volkswagen ultimately takes the win. Second time out, the Honda ends dead last again.

From a 50-mph (80-kph) rolling start, the Civic Type R pulls hard and keeps the advantage over the GTI Clubsport as they cross the finish line. Curiously, the opposite happens on the second roll with all the sporty modes engaged. 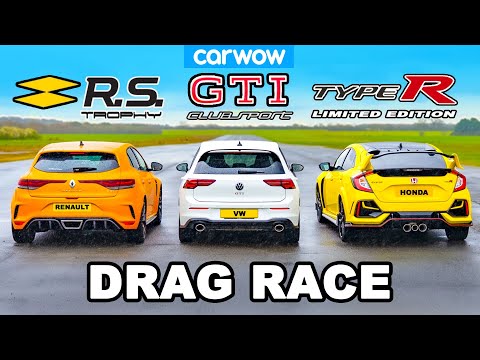