They say that everybody loves the ‘69 pony/muscle cars. But in the world of Camaro aficionados, the second generation also has its fans. And the reasoning behind the passion is easily exemplified by this restored and slightly modified ‘70.

It pays off to have idols. For example, Brian from smart battery company CTEK Chargers says that his dream car is Kyle Tucker’s Detroit Speed Autocross Camaro. This is probably one of the main reasons why he ended up buying this golden (with black stripes) second-generation (his little girls might be the second reason).

Interestingly, the Camaro SS/RS 350 not only had “two different fun packages on it” but it was also restored to factory specification (save for the vinyl black top delete) ahead of the acquisition. So, it’s a “numbers-matching motor carbureted car, Muncie four-speed, 12-bolt” old school representative. This is great because it might not get any better than that for classic car aficionados.

But remember Brian’s dream machine? Well, because it’s so nice, the ‘70 Camaro will escape a matching, full teardown fate. And the owner tells Shawn Davis, his good friend from the AutotopiaLA channel on YouTube, that he’s not going to change the drivetrain... though suspension, steering, and brakes are a different story.

During the fun part of the video (embedded below), aka the drive (kicks off at the 7:05 mark with a driver switch from 11:25 for good measure) we find out the owner didn’t like the 1970s couch driving setup. So, “little by little,” the Camaro turned into a proper restomod with factory-stock exterior looks.

It was a DIY (do-it-yourself) and “first-time tackle” project, so Brian reckons all the work he did with help from Detroit Speed parts and other aftermarket outlets has been rather “entry-level.” Well, that remains to be seen, because as far as we are concerned, he nailed all the right chapters.

Thus, the steering box is new and comes with a quick ratio, the suspension gets the car lower and firmer to the ground, while the black Formula 43 wheels with meaty 245 (front)/275 (rear) tires are also spot on. We didn’t see the brakes or hear anything about them, but it’s only logical the Chevy doesn’t have the stock ones anymore.

By the way, everything that has been modified on the Camaro can be turned to factory specification “on a dime.” After all, the owner kept all the stock parts as safe as possible. Although that might be an overstatement as far as the old bucket seats (swapped for a pair of Sparcos) are concerned. Since they now serve as the garage resting place for the younglings.

And it seems the Camaro is not going to be turned up for profit, again because of the girls. But that’s probably all right (“it’s a keeper”), and it would be cool to see if they get to drive the golden old school muscle car when they come of age...

Not much else to be said about this “half-and-half time capsule with a little modern twist.” Expect for it’s time to enjoy the ride that will take us “back in time and sound good doing it!” It’s all because of the exhaust mods, of course! Why, it was only natural the stock 350ci V8 motor also got a little love, complete with a little bit of cammed tuning, headers, and gorgeous-sounding Flowmaster mufflers...

All in all, this really was a treat – and not just for Camaro aficionados. Sure, it didn’t nail the customary burnout, but that’s probably not at all important. Above all else, it’s an example of old-school restomodding done right... in the garage, while the kids were asleep! 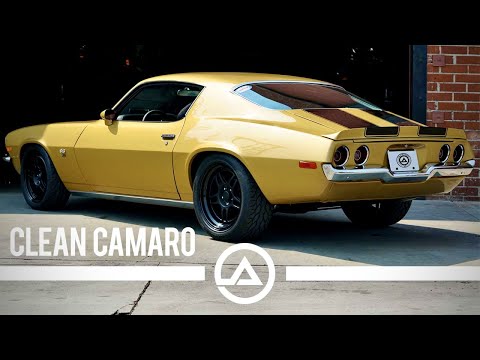