1 Kia Stinger GT Is Back for More Drag Action With C6 'Vette, Dodges, and BMW 235i

With so many enamored with crossovers, SUVs, and trucks, it’s no wonder the drag strips are being assaulted by models that would normally look surprising in the company of traditional muscle cars. But we’ve grown accustomed to such unexpected encounters, marveling at the sight of an unassuming model that can easily teach a quarter-mile lesson to everyone.
30 photos

The guys over at the Drag Racing and Car Stuff channel on YouTube are no strangers to such revelations, and we can easily remember an instance or two when ladies took charge, as well as moments when forced induction trucks aimed for quarter-mile glory. But that’s not what we’re here for.

This time around, we’re going to be discussing the phenomenon of extremely high-powered SUVs. Just the other day, we checked out a twin-turbocharged Jeep Grand Cherokee Trackhawk that nailed the quarter-mile trap speed mph record and easily faced off with modified competitors such as a 991-generation Porsche 911 Turbo S.

An even more unassuming GMC Yukon Denali now comes to attest the fact that one shouldn’t judge an SUV book by its covers... especially when it sports a 92-mm (3.62 in) turbo under the hood and a roster of other upgrades.

According to an earlier DRACS video (also embedded below just for the fun of seeing some more of this hulking AWD machine), these include a Dart LS Next 427ci short block, Frankenstein racing heads, or a Rossler 4l80 transmission, among others.

All of them easily put everything into perspective as we see muscle car after muscle car get taken down by this white behemoth. Watching it in action made us think of a sea-faring dreadnaught using its lifting bowline to make short work of its foes during combat. 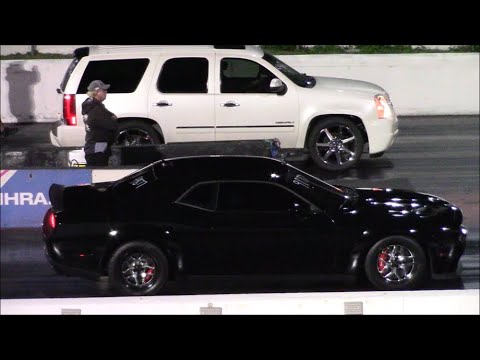 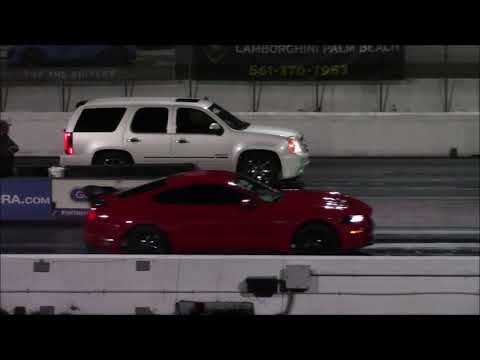