As they say, the couple that customizes cars together stays together. Jose and Rocio Lopez of the Swift Car Club from Oklahoma are a living example of that.

GMC Sierra “Green Envy,” a Striking Choice for a Family Car, Is No More

Here is Green Envy, a monster of a tricked-out truck that stands out for its bright, Hulk-like color scheme, elaborate murals and chrome work, color-matching LED lights, and attitude galore. Green Envy started out as a 2008 GMC Sierra 1500 Crew Cab, a regular workhorse that was being put to all the work it was destined for. One day, Jose Lopez took this workhorse in for a new paint job.

Green Envy is the story of how you can turn a regular truck into a show car, the car of your dreams, and the perfect venue for the wildest form of artistic expression. It is also the story of how you can make automotive art by dedicating yourself one hundred percent to a project. Even if the result is not something you would personally drive or find visually appealing, the amount of work and the details of this custom truck deserve all the attention.

Jose and Rocio told Barcroft in an interview last year that, while they’re into custom work, they never set out to turn their Sierra into something like this. They wanted to give it a new coat of paint and, as another saying goes, one thing led to another – and by the time they realized it, they and an entire team of talented folks were knee-deep into turning Green Envy into the wildest build possible.

Before we get to some of the modifications done, a piece of terrible news. Just hours prior to writing this, Jose took to his Instagram, which heavily featured Green Envy, to announce that a garage fire destroyed the truck, along with several other of the family’s vehicles. Nothing could be saved, he says, as you can see in the embed below. Green Envy is no more.

And it’s a shame because, as he points out, above everything, Green Envy was a family car. It had been built as a family project and was often used by the entire fam as transportation.

Powered by a 6.7L PowerStroke V8 engine, Green Envy was a rolling work of art, decked in murals and intricate chrome work, all of it done by hand. It also boasted bespoke wheels, steering wheel, and pedals with crystal embeds – a personal touch by Rocio, who served as inspiration for the mural painted as a surprise on the hood. The chrome grill was also custom work, as was the giant fiberglass speaker box sitting in the center console.

At first sight, Green Envy was a lot to take in. The Synergy Green paint with custom airbrush and murals, color-matching neon lights inside the cabin and LED lights in the custom Forgiato wheels, the suicide doors and the suicide hood, the intricate chrome work, the Katzkin leather and suede interior, custom floor mats, even the undercarriage was all custom work in chrome with Tiarra Luxury Mesh – visually, it was a lot to take it. However, it was the kind of car that, the more you looked at it, the more impressive it became, speaking volumes for the talent and dedication that went into every little detail.

In his most recent interview, Jose said that he had no idea the kind of horsepower Green Envy produced, and for a very simple reason: he wasn’t about speed but more about enjoying the ride. He said he’d driven it at 85-90 mph (137-145 kph) on a few occasions, but he preferred cruising in it. Well, that and taking it to auto shows so everyone else could enjoy its striking beauty.

Started in 2016 and completed at the end of two years, Green Envy was priceless – to the Lopez family. Jose never liked discussing how much money he’d spent on it, because of the many joys it had brought him. “To me Green Envy is worth a lot just because we've been building memories with our family - it's worth a lot to me,” he says in the video below.

That makes the news of Green Envy’s destruction in the recent fire that much sadder. 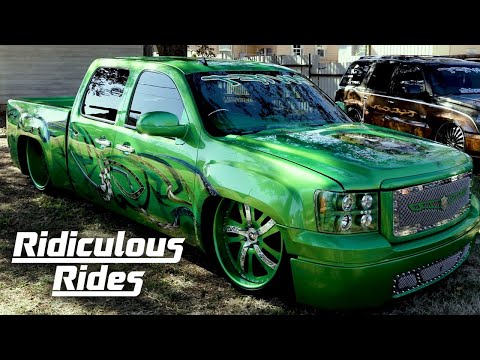