The GMC Hummer EV Is Leaking Water Through the Roof, It's Like a Colander

The GMC Hummer EV is the poster child of GM’s electrification push, but it has proved hard to build and riddled with problems so far. Among the most annoying are the water ingress problems, which led to several service campaigns. One Hummer EV owner shared a video of water leaking through the roof panels.
6 photos

When I was a child, there was a joke about how carmakers test build quality. Whereas Germans and French would test it by submerging the car underwater and see if any water got inside, the Romanians would test their Dacias with a cat. If the cat gets out of the vehicle, the quality is poor. Of course, Dacia has a much better build quality these days, but the joke seems fit for the GMC Hummer EV quality. In this case, it looks as if General Motors has tested its water ingress protection using a cat.

Earlier this year, GM had to resort to the Customer Satisfaction Program to replace a battery connector ruined by corrosion caused by water leaks. A couple of months later, GMC Hummer EV owners started complaining about the driver door switches malfunctioning. The problem was caused by water leaking around the left A-pillar, ruining a connector.

In a video posted by another Hummer EV owner, we can see that water also leaks through the roof panels. This points to severe quality problems at GMC’s assembly plant that puts together the Hummer. We know that the development phase was unusually short, only two years. GM used virtual product design and testing, and we guess the water was not a problem in the virtual environment. But in real life, things can get more complicated.

Frank Baltierrez had driven his Edition 1 Hummer EV for just 800 miles (1,287 km) when he noticed the four removable Sky Panels were not waterproof. The video he posted shows the water leaking into the cabin from the middle section of the panels. Thankfully, GM told him that the problem had been solved for newer models coming from the factory. His truck would also be fixed via the Customer Satisfaction Program by replacing the front and rear I-Bars with redesigned ones.

Despite the problem, it’s the Sky Panels that Frank loves the most about the truck. And, of course, the blistering acceleration enabled by the three-motor configuration. Watch the video below to see what Frank Baltierrez says about the GMC Hummer EV. 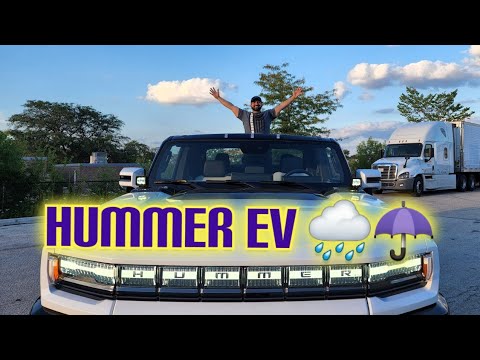