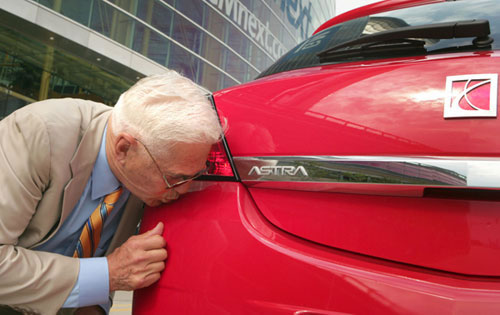 Bob Lutz, the 77-year-old former General Motors product chief, might remain with the American manufacturer and help it get back to growth, Autonews reported today citing sources familiar with the matter. Lutz was awaiting his retirement at the end of the year but, as part of GM's restructuring, he might stay with the company as head of marketing and communications.

“You work harder and harder, and it's tougher and tougher to achieve results. If I were 10 years younger, I'd tell myself: This is a three- or four-year rough patch. We'll come through it and at the other end there'd be pleasure and satisfaction, and it'd be enjoyable again. But I won't be here three or four more years now," Lutz said when announcing his retirement.

"His 46 years of experience in the global automotive business have been invaluable to us. I’ve personally learned a great deal from Bob and have very much enjoyed the time we’ve worked together,” Rick Wagoner, former GM CEO commented on Lutz's decision. “I’m looking forward to Bob’s continued contributions to GM for the remainder of 2009 – and I know the impact of his efforts leading GM global product development will continue for years to come."

According to the aforementioned source, General Motors is expected to announce Lutz's role within the company on Friday as the carmaker will officially emerge from bankruptcy.

What's interesting is that Lutz's play a somewhat hard-to-reach game with GM's officials as the former product chief told Autonews in an interview that he would reconsider his decision to retire if he were asked.

Nevertheless, an official announcement is expected to arrive in a few hours, so we'll keep you posted.