1 Manic for Organic: a Guide to Alternative Fuels
Up Next 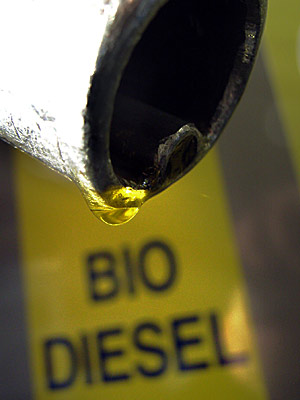 General Motors recently announced that its heavy-duty diesel pickups will feature B20 biodiesel capability, a mix of 20 percent biodiesel and 80 percent conventional diesel. The engine will be installed on the 2011 Chevrolet Silverado and GMC Sierra heavy-duty pickups, as well as on the Chevrolet Express and GMC Savana full-size vans.

The first to see daylight is the 2011 Silverado, a model that will be officially unveiled by the parent manufacturer at the Chicago Auto Show on February 10.

“B20 capability in our new heavy-duty trucks is the latest addition to a growing number of alternate fuel options offered by General Motors,” said Mike Robinson, vice president, Environment, Energy and Safety Policy. “We are seeking different paths to fuel solutions in order to maximize efficiency, reduce emissions and minimize the dependence on petroleum.”

In order to make the 6.6-liter engine B20-compatible, General Motors "upgraded some seals and gasket materials to withstand the ester content of biodiesel and included an upgraded fuel filter that includes a coalescing element," as the company explained in a press statement.

According to the US-based manfuacturer, the Duramax diesel engine will be offered with a five-year/100,000 mile warranty.

“True biodiesel is created through transesterfication and that’s what the Duramax 6.6L is designed to use,” said Coleman Jones, GM biofuels implementation manager. “Strict testing and validation was performed to ensure the new engine is B20-capable, however approved biodiesel is the only way to guarantee engine performance and longevity.”