5 Rooftop Tents 101: Here’s What You Need to Know Before Buying One
Car video reviews:
Editorial

Summer is here! This means more outdoor activities, more time spent with the family, and more time listening to the music of life. One way to do that is with a tent. But classic tents are just so yesterday. Time to take things to a whole new level with an aerial tent.

Glamp Absolutely Anywhere in the World With Aerial A1 Tent: Needs Trees or Cars

Funny enough, the tent you see here is dubbed the Aerial A1 by its creators, Opeongo. But who is Opeongo, where did they come from, and how are they going to revolutionize your summers?

Like most other teams that put out products of this sorts, only enthusiast and lovers of the outdoors could be behind it all. As it turns it, co-founders Andrew Gardner and Jacob Campbell aren’t just avid lovers of the outdoors, but together have more than 12 years of outdoor equipment development. That should be more than enough to get things of the ground, and apparently, it is.

The idea behind the A1 was sparked from an unpleasant experience with a conversion from a ground tent to a hammock setup. After several purchases, and a few more uncomfortable tests, Jacob went on to design the first flat laying and stable hammock tent. Several drawing boards and a 24-hour-funded Kickstarter campaign later, the Aerial A1 was now ready.

One clear plus of the Aerial A1 system is safety. Yes, safety. Why? Simple. With an elevated tent, neither you nor your spouse will be susceptible to any ground-dwelling critters. That alone should be a load off your mind.

Part two of the story is all about comfort. With a suspended system, you no longer have to worry about uneven terrain, rocks, sticks, or and other ground litter. To top it all off, the A1 even includes space to include a sleeping pad, even though the tent includes an under quilt to keep you warm and protected from wind and other elements.

Another reason why this tent works so well and is heralded as being the most versatile around, is because of its construction. The most important feature is the A1’s tree connection system. Because a two-point system is used, the securing straps form two lateral sides which cradle the tent in the center. This gives everything great lateral stability that can even handle up to 200 kg (440 lbs) of suspended cargo, even under windy conditions. What more could you possibly want?

Well, the team at Opeongo thought of a whole lot more than just the above-mentioned features. First, there’s a cargo hammock you can grab for an extra buck, and the under quilt is also extra. But beyond this, the A1 can also be settled on the ground, classic tent style.

Finally, as the icing on the cake, find any old tree, secure one end of the camper with the appointed straps, and the other end to any old rack found on your 4x4. Yes folks, it can even be setup next to that lone tree you find on the edge of some cliff after driving for ten hours. Heck, why not just travel with another group of friends that may own the same car, and just pitch your A1s on the cargo racks.

It's because of reasons like these that the Aerial A1 was fully funded in just 24 hours during its Kickstarter campaign; they even racked up near half million dollars in that time. Today you can buy an A1 for just $499 Canadian, just $398 U.S. at current exchange rates. Summer road trip here I come. Heck, just the thought of pitching this in my backyard brings a thought to my face. 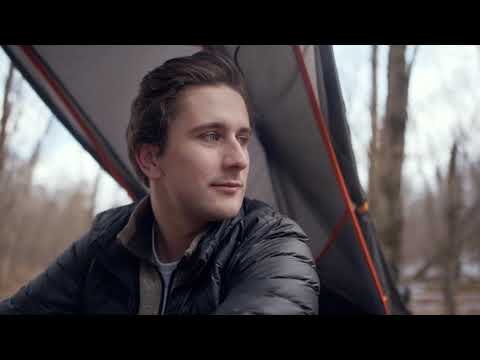