1 Black Dodge Redeye Has Matching 22s, Reflective Wrap to Remember It's a Hellcat

2 Mitsubishi’s 4G63T: The Iconic Four-Cylinder at the Heart of Nine Evo Generations

Mitsubishi’s 4G63T: The Iconic Four-Cylinder at the Heart of Nine Evo Generations

Stephen Rivers
We all love great automotive content just like the kind that Hoonigan provides year-round. What often goes unnoticed is just how much work can go into filming cool cars doing cool things. What's even more impressive though, is seeing the effort that goes into filming an actual rally race.
6 photos

Ken Block completely smoked the competition at this year's Lake Superior Performance Rally. He didn't just win, he won by almost ten full minutes over the next fastest car. No other cars in the race came anywhere near gapping the car behind them in the same way.

The adage about most things these days though is 'pics or it didn't happen' and that's where Larry Chen comes in. Chen is the guy behind the lens at the Lake Superior Rally and he talks us through the whole process of making Ken Block and his Subaru rally car look so cool.

This photographer could be mistaken for a camper considering all the gear he's carrying. In the video below you'll note how deep into the forest Chen will go to find a good photography spot. While Larry wants Ken to win, that presents a problem. Since Block is always in the lead, Chen doesn't have the chance to practice on any other cars.

He's got to get the shot the very first time in the right spot. That's why you hire a professional. Time and time again, we see him set up, consider how Block will drive through the frame, and get killer pictures.

The two catch up before the start of another segment where we see Ken has torn off his front passenger headlight. Block says he hit a rock and had to swap out his tire as well.

That's another little thing you'd never know just by looking at the results or the photos. Ken beat everyone else by at least ten minutes and that includes the time it took him to get out and change a tire.

The whole video is a treat as Chen and his media colleagues literally sprint from one filming spot to another to get more photos. It's impressive to see all the work that goes into making these cars look even cooler than they already are. 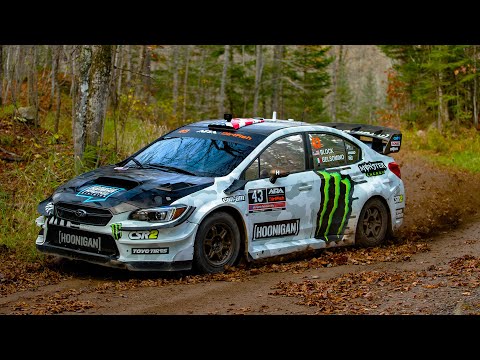