4 The Hike 100 Is the Smallest Winnebago Yet, But Still Competent

Get Ready for Overlanding Adventures With This Inflatable Shell for Trucks

There’s no doubt about it; camping and overlanding have become even more popular these past two years than they were before. But not everybody wants to commit to an expensive overlanding vehicle with everything included. Portable, inflatable camping accessories could be the answer.
6 photos

A young company based in California has just joined the ranks of adventure and outdoors-related manufacturers. One of the stars of its newly-launched range is called Air-Topper, claiming to be the first inflatable truck shell in the world. Made of a waterproof, military-grade material that’s rigid and durable, this ingenious topper can transform your truck into the perfect overlanding vehicle.

The folks at Flated wanted to create a topper that would be made to last but also versatile and easy to use. For now, the Air-Topper can fit Ford and Chevrolet standard bed trucks and short ones, as well as the Toyota Tacoma standard ones. But the startup also gives its customers the possibility of requesting a specific size.

With a four-chamber design, this shell quickly turns into a rigid structure that connects to the truck rails through eight attachment points. It also features side windows that are tinted (for privacy), and that can be rolled down for ventilation, with removable screens that keep the bugs away. There’s also a back window with zippers. On the inside, the Air-Topper is equipped with three mesh pockets to store gear or various supplies.

What’s cool about this truck shell is that it’s easy to inflate (it comes with a high-pressure hand pump) and then easy to deflate and transport when no longer needed. When you want to use your bed truck space for something else, the shell can simply be rolled into a small backpack.

All of Flated’s outdoors products are made using “high-tech dropstitch,” a manufacturing technique based on thousands of stitches, for a high level of rigidity.

The Air-Topper inflatable truck shell is available for orders, with pricing starting just under $2,000 and deliveries starting in December. 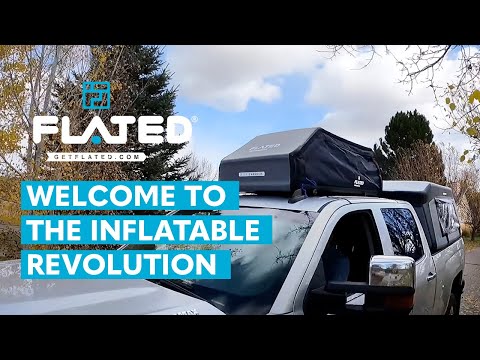