1 1980 Triumph Spitfire Is Not a Garage Queen, Gets Love From Its Owner Despite the Quirks

2 Far From Its Former Glory, There Is a 1969 Festival Camaro That Hopes To Live Again

4 Grumman Biplanes, the Predecessors of the American Navy's Flying Cats

5 Polikarpov I-16: the WWII Fighter Pilots Preferred to Fly With the Canopy Removed
Car video reviews:
Up Next

Convertible cars are built to serve several secondary functions besides having a top that flops up and down. The first of these functions is to bring the driver closer to the outside elements. But the lesser third function is to convey an air of power, or gravitas, around that very same driver.

But this subjectively vital component of the average convertible's appeal is nowhere to be found in the USDM-spec Geo Metro Convertible. Say what you will about this little tin can car with a raggedy drop-top draped over it, but what it lacks in machismo, it more than makes up for by being pretty much objectively adorable. It even has a pretty interesting story behind it.

The story of the Geo Metro has in its genesis a little-remembered partnership between Detroit's General Motors and a handful of legacy JDM automakers. A venture rooted in the poorly kept secret notion that domestic American automakers were unable, or more likely, just unwilling to build cars to the same standard of reliability as their JDM counterparts. So if you can't beat them, join them. Right?

Other American companies like Chrysler turned to Mitsubishi to reinvigorate their lineup. On the other hand, GM formed a partnership with Suzuki and, to a lesser extent, Toyota and Isuzu starting in 1989. And thus, GM acquired the underpinnings and bodywork of a second-generation Suzuki Cultus and added a light dusting of USDM trinkets.

It all started under the Chevrolet banner as the Sprint, only sold in the Western US and Canada under the alternate names of Suzuki Forsa and the Pontiac Firefly in Canada. GM assisted heavily in Suzuki's initial R&D for the Cultus platform, later dubbed the GM M Platform. But in 1990, the hatchback or sedan-oriented Metro added a model that'd cement its place as a footnote in automotive history.

The Metro convertible didn't sport any novel or special features that set it much apart from its eco-box cousins. Under the hood was the same anemic variant of the 1,000cc (60.5ci) three-cylinder Suzuki G-series engine jetting a scarcely believable 55 horsepower. Scarcely believable because most Americans hadn't been familiar with power numbers that paltry since the early 1930s. In whatever quantities the engine could muster, power was fed to either a three-speed automatic or five-speed manual.

With only 1,753 lbs (795 kg) of weight to lug around and independent-strut suspension at all four corners, there's at least a passing chance of an exuberant driving experience, right? Sadly, in the case of the three-speed auto box especially, there was simply no way that was going to happen. Zero to 60 mph (96.5 kph) was accomplished in 12.6 seconds in a 1993 Metro LSi Convertible, a whopping 0.1 seconds faster than the equivalent Metro hatchback.

This was good for a quarter-mile time of 19.0 seconds at heaven knows how low of a speed. Or about enough time for a Honda S2000 to sprint to 100 mph (161 kph). Couple this with a floppy unibody chassis made out of what can only be described as balsa wood, and you can see why no one ever thought this was the second coming of the original Mini or Fiat 500. Sadly, the Metro Convertible's interior matched the exterior and the underpinnings in terms of quality.

People accuse modern super cheap cars like the Chevy Spark of being cheaply built inside and out. Well, to that, the Metro Convertible bids a fond "hold my beer." Though it's beaten in out and out awful build quality by Yugos and Ladas, the interior quality of the Metro and its convertible cousin was still nothing short of appalling. With its super-thin sheet metal doors, even thinner dashboard plastics, and a grey color choice that's reminiscent of abject melancholy, there's not much worth bosting about inside apart from maybe the stereo.

But does that stop people from fawning over a Metro convertible on the rare chance someone finds one parked in the wild? Nope, not even slightly. At the very least, you're going to turn your head and make a double-take to see what it looks like. For all its anemic drivetrain, floppy chassis, and build quality only a Trabant engineer would find sufficient, it can all be forgiven. Why? Well, just look at the thing! It's so gosh darn adorable.

In a modern era where even cheap economy cars are designed to look angry or aggressive, the Metro, in all its forms, opted for a different approach. The Japanese have the perfect word for such an aesthetic. It's called "Kawaii" or "Cute, Adorable, Lovely, or Lovable" in English. That's why even 30 years later, American gearheads still have room in their hearts for the Geo Metro. Despite the fact, it was just about objectively terrible.

To give you a better sense of what this Geo was all about, you can find below a review of such a trinket, put together by Doug DeMuro a little over a year ago. Also, check back soon for more from Open Top Month stories here on autoevolution. 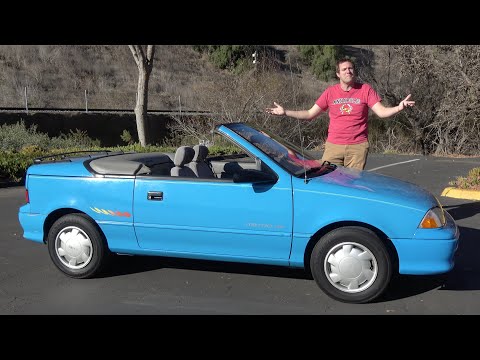