Cristina Mircea
Artificial intelligence (AI) seems to power all sorts of devices nowadays. Why not a lawn mower, too?
6 photos

Maintaining a good-looking lawn is not all about mowing it constantly but also about keeping intruders from constantly stomping on it. The grass in greener on the side that no one walks on. This guy came up with a solution to solve this problem. It’s a gentler alternative to turning the hose on passers-by who don’t keep their feet on the sidewalk. But instead of a hose, the gimmick uses already installed sprinklers.

YouTube user Ryder Calm Down is a tech wizard with a degree in Science and the “people-detecting lawn sprinkler” is not his first creation. The guy also built a machine that notifies him when a dog passes in front of his house because apparently looking at cute animals such as dogs and cats fights depression and boosts your serotonin and dopamine levels. Then there’s also the real YouTube subscriber ringing bell, his Vine machine that randomly quotes vines when you pull a string, and more.

His latest invention is what he calls an evil artificial intelligence-powered lawn sprinkler that detects people who step on your lawn and gives them a cold shower to put them back on the right path. Although given the recent temperatures in the U.S., it might actually be a blessing in disguise than a punishment.

The people-detecting lawn sprinkler is only turned on when someone walks on the lawn and it uses a Raspberry Pi running a code, a Wyze security camera, and a sprinkle control valve. Ryder Calm Down programmed the entire system so that when someone walks in the view of the camera, the sprinkler turns on.

As seen in the security, the evil sprinkler works like a charm, keeping intruders off the lawn. However, this supervillain accessory was built for entertainment purposes only, so you can’t buy one. For now. 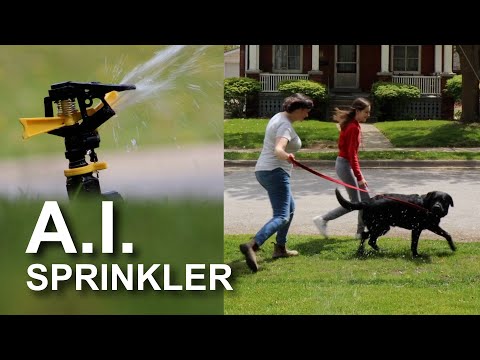