2 2022 Genesis GV70 Goes Turbo Across the Board in Korea, AWD Is Exclusive to V6

The Hyundai Motor Group has been keeping itself very busy this year. Kia has changed its logo to bode well with its updated name and also launched the valiant EV6. Hyundai, for its part, has also launched interesting things such as the Staria MPV line, the all-electric E-GMP Ioniq 5, and is now diligently taking care of the future of its luxury arm, Genesis.
12 photos

The latter has just outed in Los Angeles its Genesis X EV-based high-performance GT concept car. But that wasn’t enough for the company because on the other side of the planet, it has dazed and amazed the world’s largest automotive market to signal its official arrival in China.

Basically, the company used the sky of downtown Shanghai as a virtual canvas. In what appears as something inspired by Kia’s recent showcase of “pyrodrones,” Genesis literally filled the skies with no less than 3,281 illuminated drones that were used to “paint an evocative picture of its brand identity and distinctive design philosophy.”

Naturally, just like the sister company before it, Genesis also snatched its own Guinness World Record in the process. The performance was specifically set up to mark the brand’s official arrival in China. The brand saw its name wrote alongside the Guinness accolade for “The Most Unmanned Aerial Vehicles (UAVs) airborne simultaneously.”

Nicknamed the “Genesis of Genesis,” this light show included a string of creations which included a Genesis silhouette, the Crest grille, full looks at the G80 and GV80 designs, and of course, the winged Genesis logo.

The aerial display “was a special opportunity to engage with our audience and show what Genesis is about. With this record-breaking drone performance, we brought our brand story and philosophy to life for many Chinese consumers,” explained Markus Henne, Chief Executive Officer of Genesis Motor China.

For now, the G80 sedan and the GV80 SUV sibling seem to be the first models set to arrive in China, but the company promised it would soon expand its local operations to bring new Genesis “experiences” and products. 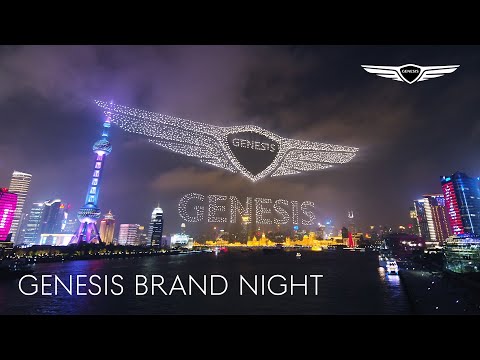