5 2021 Audi A4: A Convincing Upgrade, With Fine Integration of High-Tech Elements
Up Next

Mihnea Radu
We bet only of few of you are aware that the 2021 Genesis GV80 is available with a brand new 3.0D engine. That's right, a 3.0-liter turbocharged diesel, and it's got the sweet inline-6 layout, like a BMW.
6 photos

Diesel engines make a lot of sense in large SUVs, true off-roaders like the G-Class or Toyota Land Cruiser. They offer lots of low-end torque and fuel efficiency can't hurt while towing either. They used to be supremely popular in European versions of everything from the BMW X5 to the little Nissan Juke. And diesel SUVs almost became a thing with the Mazda CX-5.

However, the crackdown on dirty oil burners started in the wake of the Dieselgate scandal, and manufacturers are now switching to plug-in hybrids, particularly in the premium segment. These align themselves with tax incentives or access benefits from European countries, so our first contact with the GV80 3.0D comes from Australia of all places.

Is it really that fast? That's what we're here to find out, with the help of this independent test from PDriveTV. Before the racing begins, we hear that the GV80 has a slab-like design that's reminiscent of a Bentley. And for the record, the Bentayga also a diesel engine, the 4.0 TDI that got discontinued in 2020.

Despite being fitted with Michelin Pilot Sport 4 tires, the GV80 3.0D only managed 62 mph in 6.95 seconds and a quarter-mile time of about 15 seconds. It doesn't sound as good as the 3.5L V6 either. Still, the engine is smooth and supposedly delivers about 26 mpg combined (8.8 l/100km). 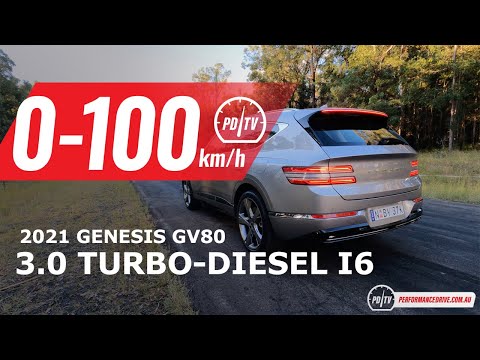