1 You Can Almost Hear Everyone Scream ‘SHAME!’ as This Porsche Cayenne Drives By

Home > News > U-turn
Cristian Gnaticov
When Hyundai launched the Genesis brand back in 2015, little would they know that some of their upcoming vehicles would tap into their OTT sides.
9 photos

Case at hand, meet this Genesis GV80 filmed in California, which has become too flashy for its own good. The luxury SUV has a peachy wrap, contrasted only by the shiny exterior trim. But that’s not the only thing that stands out, as it also sports a set of 26-inch wheels made by Forgiato.

Privacy windows are on deck, and so is a serious sound system, with the subwoofers eating a good chunk of the luggage area. Step foot inside and you will also see another mod, which comes in the form of a starry sky headliner. This feature is normally reserved for Rolls-Royces, but has steadily made its way to other vehicles too, and now the GV80 is one of them.

Now, we may not be fans of that custom wrap, even if the whole exterior looks very clean, though we have to say that the wheels at least do not seem that big overall compared to the rest of the car. A high-end audio is a must for audiophiles or those who want to make their rides stand out even more, and the starry sky headliner gives it an upmarket touch. Talk about mixed feelings.

Gunning for the likes of the BMW X5 and Mercedes-Benz GLE, the Genesis GV80 undercuts its main rivals, with an MSRP of $48,900 in the United States. The base model uses a 300 hp 2.5-liter four-pot, eight-speed automatic transmission, and rear-wheel drive, and for the mid-spec, which brings the all-wheel drive system and others, you’re looking at $54,650. The range-topper starts at $59,650 and packs a 375 hp 3.5-liter twin-turbo V6. It gets standard AWD and can be had with seating for seven. 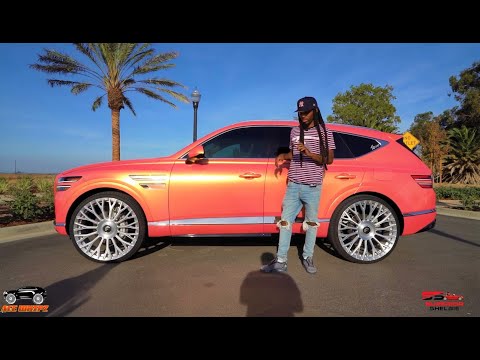