3 How MotoGP Bikes Are Being Timed and the Flags' Meaning

Project Geco is the brain child of Eric Pepe Offenstadt, who leads a small, but highly enthusiastic, development team. Geco is also the result of countless years of painstaking research in the motorcycle suspension industry, blended with automotive experience gained in the high-performance Formula 2 and Formula 3 racing. Geco is the sport bike that changes architecture.

Geco, the Shape-Shifting Motorcycle of the Future

Actual motorcycles are trying to make the best compromise between grip or traction and braking power. However, not even the most advanced prototypes, the MotoGP bikes, can do much to change the way things are. Geco may bring one of the biggest upgrades to the way a motorcycle behaves when braking and turning in a long time.

While the total traction of an F1 car is way higher than that of a motorcycle, it looks like the two-wheeler industry has reached the point where tires are no longer becoming noticeably "grippier". In fact, Offenstadt says that the maximum chemical grip was kind of reached in 1979 already. 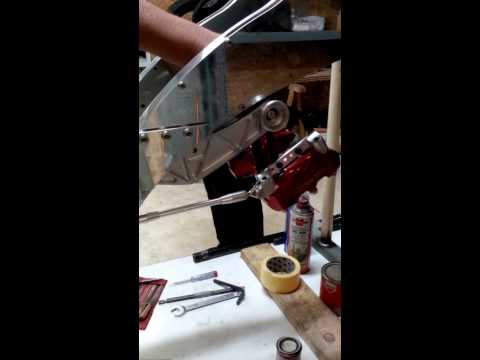 Of course, tires evolved, but not as much as the rest of the motorcycle: engine, chassis and all. Even the best tires are now underperforming, so a new paradigm was needed. And its name is homokinetics.Homo-what?
Homokinetics, or constant velocity seems to be one of the ideas behind the Geco project. Eric Offenstadt has spent a huge amount of time understanding the way all the forces at work in a motorcycle in motion affect handling and braking.

At first, he BELIEVED that there was more to motorcycle stability than met the eye, but now he KNOWS what it is. And Project Geco is the answer to many of the possible questions, he says.

The approach to stability in turns must be a generic one, taking into account all the forces at war one can measure on a bike. Yes, "at war," because a moving motorcycle, like pretty much anything else in the world, has to deal with action and reaction.

In simpler terms, the fact that you can ride a bike around a bend means that the forces you're mastering are bigger than those opposing such a maneuver. And when the balance disappears, you crash. 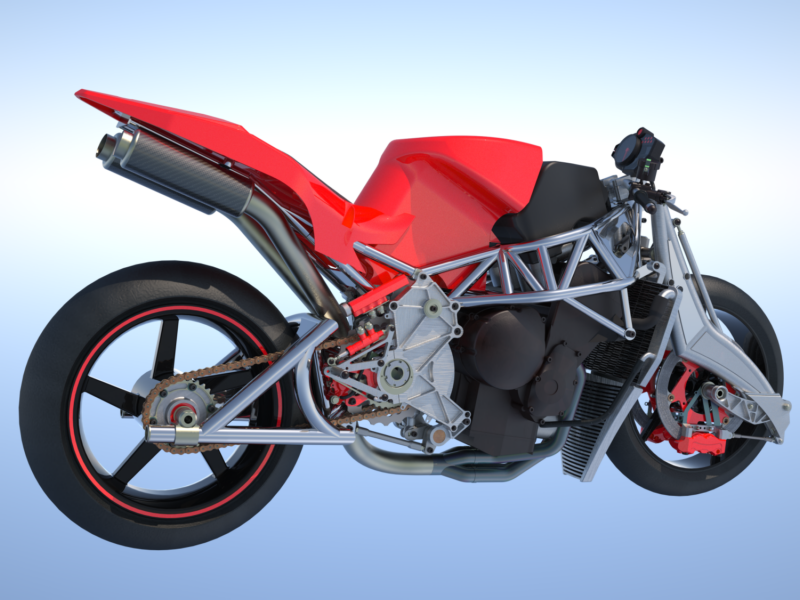 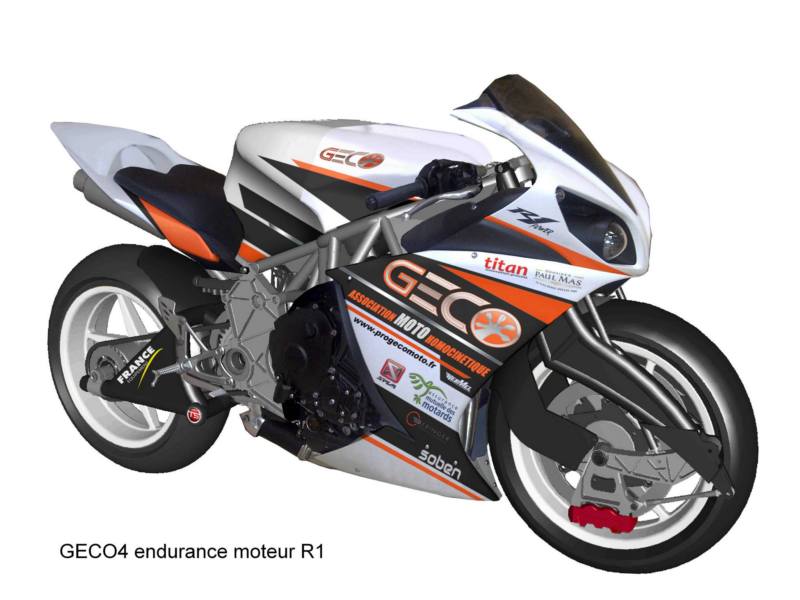 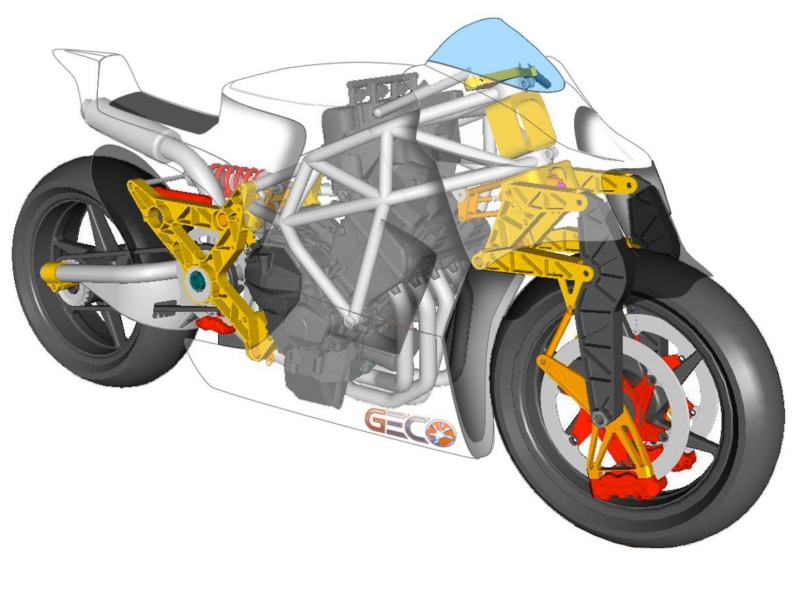 Offenstadt understood that not even the most compliant of the actual motorcycle frames cannot deliver the necessary performance to change the game significantly. That is, because the suspensions and the very way these bikes are built are unable to counter-react to the parasite forces which appear in a motorcycle.

As advanced as the MotoGP frames and suspensions are, Pepe Offenstadt says the Geco is dwarfing them. And if you'll take a look at the intriguing fork of his bike and the rear shocks array, you'll definitely raise an eyebrow, to say the least.May the force be with you
Gathering enough knowledge on what happens in the whole motorcycle was a grueling task and took ages, but Eric Offenstadt says he has finally figured out a way to get rid of all the “parasites”. Just like constant-velocity is used in car transmissions, the Geco must put it to work.

Now, given the 4-wheeled design of cars, lateral grip was essential, whereas a bike is 100 percent longitudinal, some may say. This is true, but a bike still flexes and has shifting weight, plus the added movements of the rider. The creators of the Geco understood that the center of gravity is the key for stability. And decided to help it move around the bike-rider-track reference system.

Bike stability is the result of an equation of acting and reacting forces of a mind-boggling complexity. Still, this does not mean that math can't solve it... with the right operations and aids.

Offenstadt's team also figured out that a bike which rides smoother (from the point of view of constant velocity) is also saving the tires, with spectacular results of up to 40% less rear tire wear recorded.

So, how do we make a homokinetic, constant-velocity bike with a holistic approach to negotiating the parasite forces? Variable architecture, Offenstadt answers.Everything changes
Eric Offenstadt found out that the bike's architecture must change according to the various riding conditions, as strong accelerations, hard braking, leaning while braking or exiting curves all came with their own types of forces. And these forces had to be dealt with in real-time.

“The problem is not to ‘invent’ at random new steering architectures (the step by step way).
The issue is to point-out what can be improved as far as riding reactions are concerned. Point out where are the gaps between what is done empirically and what could be achieved, if suspensions were RATIONAL and standing-up to the harsh laws of the physics,” Pepe says.

Basically, the Geco had to have a reaction at hand for every action affecting the bike. Wheelie tendencies, rear-wheel hopping, flexing and understeering when cornering hard, the dive in the first part of the corner and the complex behavior of the machine when throttling out of a bend, they all had to be cared for.

Even more, portions of uneven ground, the various leaning angles and so many other variables needed comprehensive solution, and Eric thought that no bike with an almost fixed architecture could deliver such a response.

So as he was already out of the box, he took more steps away from it. The traditional fork was replaced with a trailing link one, and the rear suspension got three shock absorbers to compensate for the numerous parasite forces.

With a design not unlike the one of racing car suspensions, the Geco's rear assembly can now counteract the unwanted side-effects braking, accelerating and constant speed cornering have on stability.

As for the front, the trailing link offers exceptional shock absorption and provides constant flexibility. The trail of the front is variable and it also affects the wheelbase, changing the way the whole machine behaves in each scenario. This includes the aforementioned braking, throttling cornering at constant speed, corner entries and exits, or bumps.

Putting it bluntly, the bike will effectively alter its dimensions in order to provide the best rolling chassis and suspension in various scenarios.

This will alter the speed the wheels spin at, producing a more coherently behaving assembly. Even more, the transmission is enforcing the constant-velocity ideal. While traditional bikes have one chain linking the front sprocket and the one on the rear wheel, the Geco has an intermediate shaft. 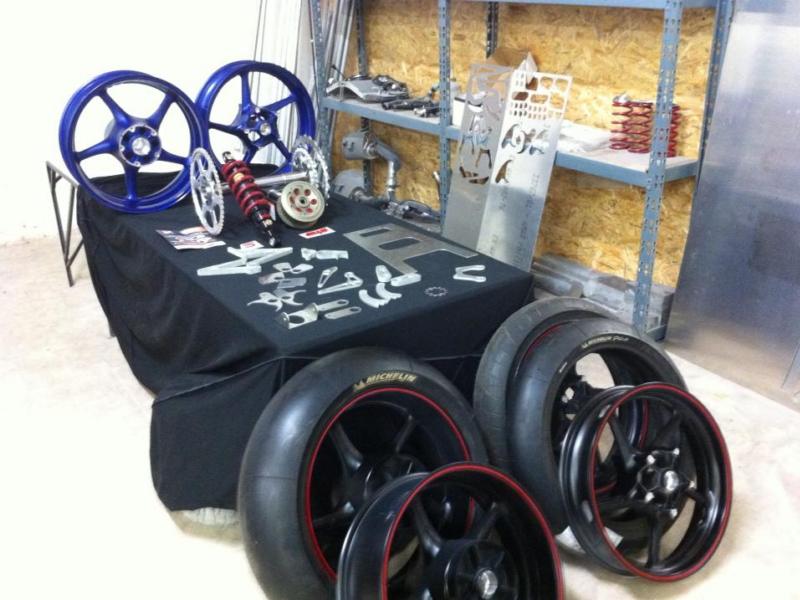 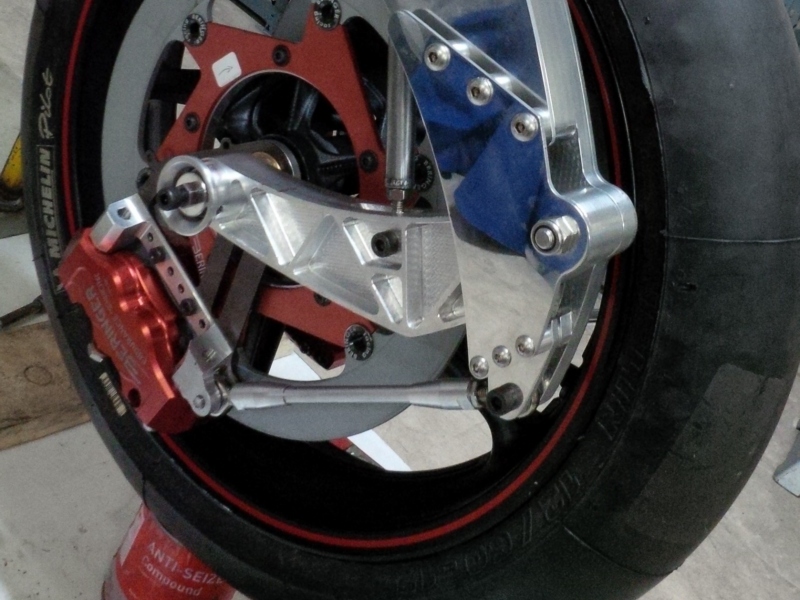 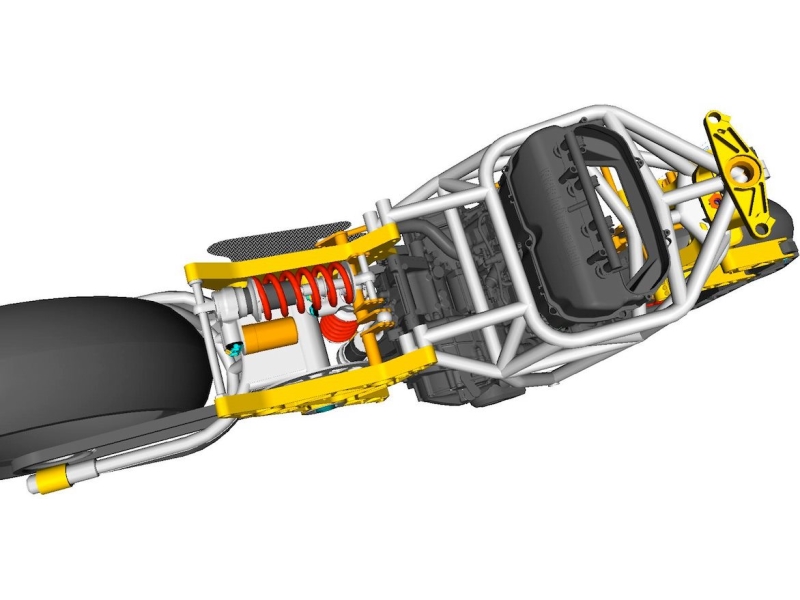 The engine is borrowed from the Yamaha YZF-R1, but the final transmission assembly is all new. It comes with a chain-driven shaft that crosses the bike from the left to the right side, and the right sprocket then drives the rear wheel.

Offenstadt and his team chose this solution to eliminate other parasitic forces that hinder the constant-velocity design: chain stretching, and the way the chain reacts as the rear suspension works up and down.

With the added shaft, the rear wheel spin is no longer influenced by the movements of the swingarm in relation to the rest of the motorcycle, and this brings in more coherence to the grand design.

The whole chassis was developed by the Project Geco team, including the fork, the uncanny trellis midship and the swingarm. Beringer and Michelin have thoroughly supported the project and provided top-notch equipment and knowledge.
Geco was showcased at the motor show in Paris, France, and is so far in the prototype phase. With all the team working almost for free, the present costs, estimated around the €30,000 ($40,550) mark, have been kept to a very low €5,000-6,000 ($6,750-8,110).

Project Geco still needs funding to start testing the prototype under real-life racing conditions on a pro-grade circuit. You can support their amazing endeavor making donations via PayPal, or getting in touch with them via the ProGego website or Eric's Facebook page.

The Geco may indeed bring a revolution in the motorcycle industry in case the benefits of the komokinetic design can be extended to more than racing bikes and offered for a fair price.

Thanks to the Geco team and Baygon Noir for all the info. I knwo we'll be hearing more from them soon.