2 NASCAR to Test Drivers/Teams in January 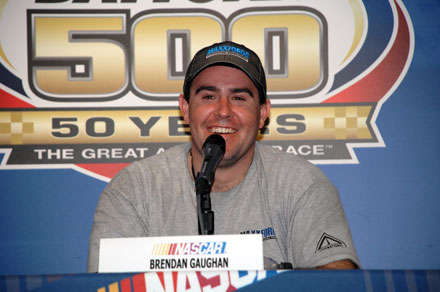 Brendan Gaughan was announced as the new Rusty Wallace Racing official driver in the 2009 Nationwide Series. The former Truck Series rookie of the year will therefore drive the No 62 Chevrolet throughout the next season, replacing the now-defunct No 64 car driven by both David Stremme and Max Papis in 2008.

Gaughan's part-sponsor for his 2009 campaign will be South Point Hotel and Spa, with Rusty Wallace Racing announcing they are yet to reveal the full sponsorship for the No 62 Chevy later this month. Furthermore, Gaughan will be joined in at RWR by longtime Truck Series crew chief Brian Berry.

“It's going to be very exciting for me to drive the No. 62 again. That number has a lot of meaning to my family that not many people know about. My big brother John's football number was 62 and my two big brothers have always been my heroes in life,” said Gaughan after securing his deal with RWR. The main reason why the organization decided to change the team's number from 64 to 62 was to honor Gaughan's family racing background.

“My father has always been into numbers as well; when we first came up with the number back in 2001, he loved to remind me that his lucky number has always been eight and that 'six plus two equals eight;' he would always remind me as if I couldn't figure that out! I also feel that the number is a tribute to Rusty. With all of his years running the No. 2 Miller Lite car, our replacing the four with a two -- in the same style as his old number -- makes this an even bigger honor for me,” added Gaughan.

Gaughan ranked 15th overall in last year's Camping World Truck Series, posting two Top 5 finishes and making 5 Top 10 appearances for Circle Bar Racing. The Californian thanked his former crew in the Truck Series, adding that he would have stayed with the No 10 team hadn't the opportunity to join RWR in the N'wide Series arose.

“Had it not been for the opportunity with RWR, I was really looking forward to continuing in my pursuit of victories for Circle Bar Racing,” concluded Gaughan.