Gang of Thieves Storm Michigan Dealership, Drive Off With 13 Vehicles

Home > News > U-turn
Cristian Agatie
Thieves drove off with 13 stolen vehicles from a dealer lot in Flint, Michigan. While car theft from dealer lots is not uncommon, this incident was notable because the thieves exchanged fire with the security on site.
7 photos

Car thieves have become bolder over time, and they are now not only going to the source to steal new vehicles but are also willing to act more dangerously. A gunfire exchange was reported on Monday morning after 30 people stormed a Flint dealership and stole 13 vehicles. Fortunately, the guard was not hurt, but the thieves escaped in the stolen cars.

According to Fox 2 Detroit, the thieves exchanged fires with the guard before getting into vehicles and driving through the gate, damaging other cars on their way out. Other vehicle lots in Flint have been targeted before, but this is the first time shots were fired. 13 vehicles were stolen in this heist, including two Dodge Durangos and a 2022 Ford Mustang.

The driver of the Mustang lost control of the car on southbound I-75 near Joslyn in Auburn Hills and died in the crash. Two other stolen vehicles were involved, and the Police apprehended the two suspects. They are still investigating and trying to figure out who the suspects are. The security guard was too shocked to describe the thieves accurately. Police later recovered seven stolen vehicles in Oakland County and the Detroit area.

The incident also triggered a shelter-in-place order at Oakland University in Rochester Hills after the Oakland County Sheriff’s Office believed two suspects in stolen Dodge Durangos may have been armed and on the campus. The order was lifted hours later after a witness saw people fitting the suspects’ description leaving the area.

Stealing cars is the new normal in Detroit, with thieves going to dealer lots and even directly to the plants. The carjackers are also becoming younger. This summer, Police arrested three school kids while trying to steal new Hellcat-powered Dodge Chargers and Challengers from the Jefferson North Plant’s lot. 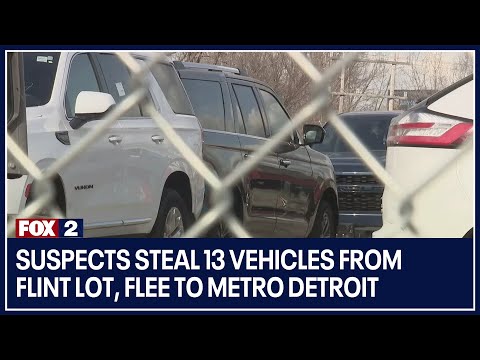