Seeing through walls is no longer something we only hear about in movies but an actual military capability that enables armed forces and intelligence operators to detect hidden moving threats while remaining at a safe distance. One of the most powerful devices in the world, when it comes to this capability, is the Xaver LR80.
7 photos

Based on proprietary, cutting-edge technologies, with a state-of-the-art Ultra-Wideband (UWB) sensor, the Xaver LR80 system can accurately detect live objects behind standard wall materials. The latest addition to Camaro-Tech’s product range, this unique system seems to be the first in the world to be able to detect live objects from an incredible distance of almost 330 feet (100 meters).

Controlled by a 10” touchpad with an intuitive user interface for easy operation, this portable imaging system provides real-time critical data to intelligence operators from a safe distance. It’s for the first time that military operators are able to see through walls from such a long distance, according to Amir Beeri, the Israel-based company’s CEO. The system can even detect unseen micro-movements of live objects, such as breathing, enabling an unprecedented level of situational awareness.

Not only ultra-sensitive but also lightweight, the Xaver LR80 shows remarkable versatility: it can operate from inside a moving vehicle, from a rooftop, or on the combat field, camouflaged under a cover-up. It can basically operate in any type of urban or rural environment. Its only limit? Metal. There’s no radio signal that can penetrate metal, and the Xaver LR80 is no exception.

The Israeli company has also developed a similar system, called Xaver LR40, able to detect live objects behind walls from around 164 feet (50 meters) away. Both imaging systems are part of the company’s Xaver range, which is currently deployed by military forces around the world, not just for intelligence operations but also for search and rescue missions.

Camaro-Tech will be showcasing the XaverLR80 system at the prestigious Milipol military expo in Paris. The event is taking place between October 19 and 22, 2021. 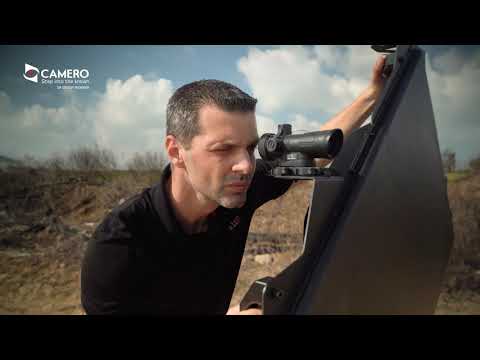