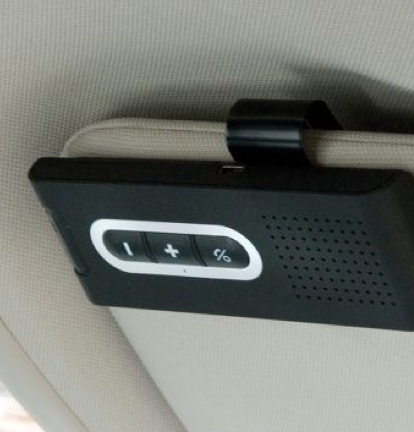 Although it may sound like piece of cake, buying a Bluetooth handsfree or speakerphone can prove to be pretty difficult, especially if certain countries prohibit talking while driving.

The Slimmest Bluetooth Speakerphone is said to be one of the easiest to use Bluetooth-able devices on the market, allowing you to access its most important functions through pre-defined buttons. The device can be easily installed on the sun visor, which means you can answer or initiate calls while keeping your attention to the road.

The gadget has built-in echo cancellation and noise suppression software to capture your voice without too many interferences. More importantly, it can pair with up to seven Bluetooth-enabled devices, as well as with Bluetooth-capable computers, in order to place and receive calls using Skype or any other VoIP applications (note that you may need a dongle if you intend to use it with Skype and your computer does not provide Bluetooth connectivity).

The integrated battery provides up to eight hours of talk time, the folks over at Hammacher Schlemmer wrote in the description of the device on their online store, combined with up to 500 hours of standby time. Obviously, the battery can be recharged using the package-included recharged, a process which is said to take up to three hours.

The package also includes an AC and a DC charger for recharging the device in you car or using a regular outlet at home. And because we were talking about the whole package, you can purchase it for as much as 70 bucks, which is a moderate price taking into account the amount of features it provides.