Alex Oagana
Launched last year to cement Porsche's position in the niche of all-weather supercars that can be driven everyday and which can glue the back of your head to the headrest if you so much look at the go-fast pedal wrong, the Porsche 911 Turbo S (991) is one of the most desirable cars to ever come out of Zuffenhausen.
1 photo
Its 3.8-liter flat six is good for 560 HP and 700 Nm (516 lb ft) of torque, which can go to 750 Nm (553 lb ft) of torque when the demonic Sport Plus settings are activated.

In short, the latest variant of the bonkers Porsche 911 Turbo S is one hell of a car, as it can even give hypercars a run for their money when it comes to performance, with the added bonus of all-weather driving capabilities.

The aforementioned conclusion doesn't make it the only car that can do that anymore though, now that more and more Mercedes-Benz tuners have started getting their crafty hands on the E 63 AMG S-Model – currently the fastest production sedan in the world.

You probably know about the Germans from GAD Motors, the insane engineers who were responsible for making an even more powerful Brabus Bullit or transplanting a 4Matic all-wheel drive system and a highly-tuned M157 engine on a C 63 AMG Coupe Black Series.

Well, one of their creations is a white and far from monstrous-looking Mercedes-Benz E 63 AMG S-Model in the UAE, which can be seen obliterating a Porsche 911 Turbo S of the 991 variety in the short video below.

GAD Motors ups the ante quite a bit on the powerplant, with the white example below sporting no less than 850 HP and a massive 1350 Nm (996 lb ft) of torque, something which should give it a zero to 100 km/h (62 mph) acceleration time identical to the aforementioned 911 Turbo S: a neck-breaking 3.1 seconds.

In other words, both cars should go neck and neck from a dig, which they uneventfully do, but the following video also shows what happens after 100 km/h (62 mph) – with the GAD-tuned E 63 AMG S-Model leaving the 911 Turbo S in the dust. 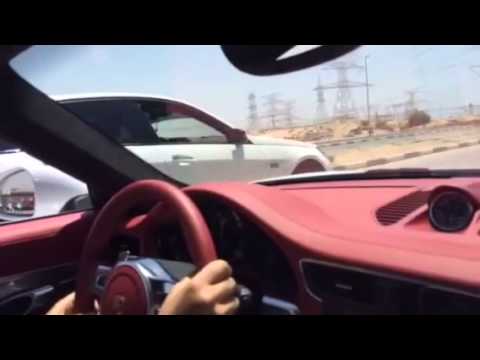